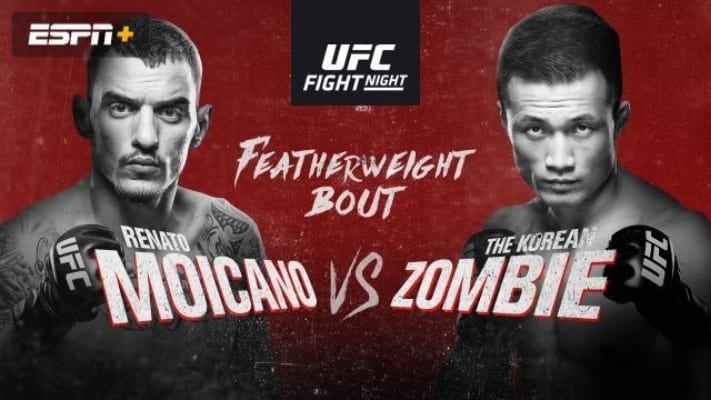 In the main event of the night, featherweights Renato Moicano and “The Korean Zombie” Chan Sung Jung will go head-to-head. Check out our LowKickMMA UFC Greenville staff predictions for the bout here:

Renato Moicano is one of the more promising prospects at 145 pounds. Although he hit a road bump against Jose Aldo in his last outing, he is still one of the more dangerous competitors in the division. “Korean Zombie” is also coming off a disappointing defeat after his last-second knockout loss to Yair Rodriguez.

Jung is a powerful striker and a seasoned veteran, and I have a funny feeling he’s going to connect on the Brazilian with a big shot for the knockout victory.

It still amazes me that this is a main event but granted, it is a fight night card, so I digress. Both fighters are coming off losses in their latest outings. Moicano has looked extremely impressive before his last fight which was a loss to Jose Aldo. I think that was just a speed bump in his way but ready to rebound in a big way with a win.

This is an extremely tough fight to call in my opinion. Moicano is more than capable of using his reach to his advantage and just striking and moving away from Jung to win a decision. The question is if he can do it for five rounds.

Another thing to consider is Moicano doesn’t have a lot of power, especially compared to Jung, and a reach advantage didn’t seem to phase The Korean Zombie against Yair Rodriguez, at least for 24:58 of their fight. I have a feeling Jung will be able to catch Moicano and get the win.