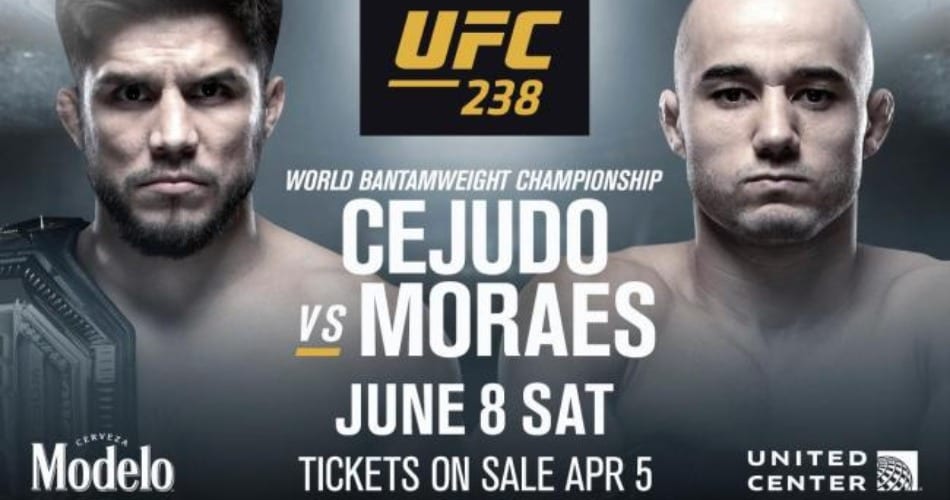 Tomorrow (Sat. June 8, 2019) UFC 238 takes place from the United Center in Chicago, Illinois. In the main event of the night, the vacant 135-pound title is on the line, as flyweight champion Henry Cejudo takes on Marlon Moraes.

The LowKickMMA staff has offered their predictions for the top bouts on the card. Check them out below:

This is an exciting stylistic match-up. Moraes has proven to be one of the most terrifying finishers in the lower weight classes of the UFC. However, he has never had to face a man with the wrestling pedigree of Henry Cejudo, who has evolved into quite the striker over the years as well.

But Moraes is in the middle of a very special run and seems to be unstoppable at the moment. I’m going with Moraes for the knockout victory in this one. (Prediction: Marlon Moraes)

Jessica Eye has been on a great run at 125 pounds. There’s no doubt she deserves her title opportunity now, the only issue is she earned it in the middle of the reign of one of the most well-rounded and technical champions in women’s mixed martial arts (MMA) history.

Shevchenko is simply better than Eye in every department. “The Bullet” should leave Chicago “And Still.” (Prediction: Valentina Shevchenko)

The people’s main event. Two of the most game fighters on the UFC roster at the moment. This has Fight Of The Night written all over it, and what a stylistic match-up we have here. Both men are ridiculous strikers, and have a history of putting their opponents out on the feet.

However, both men also have a slick jiu-jitsu game, with “El Cucuy” having a slight edge in that department. This is honestly a toss-up, but Ferguson is out to prove a point and if he’s able to get the fight to the mat, he might just lock in that signature D’arce choke. (Prediction: Tony Ferguson)

Moraes and Cejudo have both been on fire as of late, which should make for an entertaining fight that could be one of the best fights of the night. Cejudo is on such another level right now that it’s hard to imagine many fighters beating him. Moraes has a punching chance but I have Cejudo winning by unanimous decision. (Prediction: Henry Cejudo)

While Eye has looked pretty impressive to get to this point, there are a select few fighters who can beat Shevchenko right now – and Eye isn’t one of them. Shevchenko should be able to shut down any takedown attempts and turn it into a one-sided beatdown for five rounds for the decision. (Prediction: Valentina Shevchenko)

As much of a Cerrone fan that I am, I don’t see a way that he wins this fight. Ferguson is clearly the second best fighter in the division right now and even has a chance to beat Khabib. Cerrone will get finished by TKO in the third round. (Prediction: Tony Ferguson)

Henry Cejudo has upset the odds in his last two fights, but I don’t really think his win over Demetrious Johnson was decisive. As for TJ Dillashaw, it was clear for me the weight cut affected his chin.

That’s not taking anything away from Cejudo though — I feel he can have some success with his wrestling, but in order to do that, he has to close the distance and Marlon Moraes is someone who, unlike anyone at 125 pounds, can shut your lights off. I think we could be in store for another first-round finish with Moraes, while becoming the new champion. (Prediction: Marlon Moraes)

This one is not hard to call at all. The flyweight division is very new and so, Jessica Eye has been given her first shot at UFC gold. The problem is I don’t see one area where she could possibly excel over Valentina Shevchenko, while she has never faced someone as good as her either.

“The Bullet” is a monster betting favorite and it’s easy to see why. I expect a submission win and a successful title defense. (Prediction: Valentina Shevchenko)

This is such a great fight between two of the most exciting fighters in the UFC, let alone the lightweight division. “Cowboy” is enjoying a career resurgence and surprised me with his dominant win over Al Iaquinta.

However, Tony Ferguson is on a different level who can break opponents. While this would be a great Fight of the Night contender, I expect “El Cucuy” to get the knockout in the first or second round. (Prediction: Tony Ferguson)