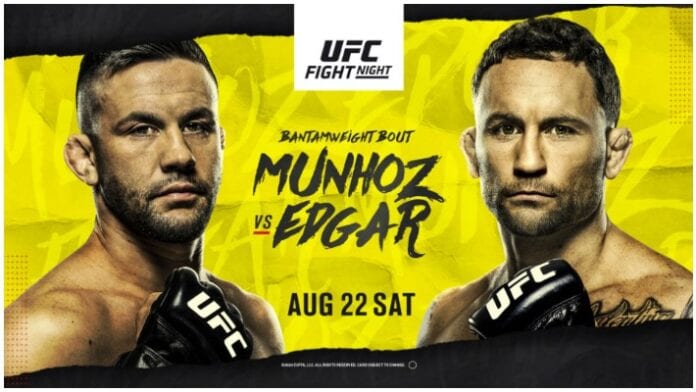 The facility played host to the long-awaited Bantamweight debut of Frankie Edgar who faced off against the number five ranked Pedro Munhoz. After a five-round war the judges saw the fight for Edgar who won by split decision. On the day of the event the co-main event fell out due to Ovince Saint Preux testing positive for COVID-19 seeing Light-Heavyweight’s Mike Rodriguez and Marcin Prachino take the slot. In their bout, Rodriguez found a devastating elbow to start the end of the fight for Prachino. Outside of these two bouts, there were many moments on the card worthy of bonuses.

Fight of the night came in the main event between Pedro Munhoz and Frankie Edgar. Entering the first round Munhoz landed multiple heavy right hands while Edgar seemed to land just as often resulting in what was a close round. In the second round, Edgar managed to up the pace by mixing in takedowns that helped him to secure the round. In the third round, Munhoz came out and attacked the legs of Edgar to take away some of his mobility while both fighters traded shots. The fourth and fifth rounds were fairly event resulting in a split decision on the scorecards going to Edgar.

The First Performance of the Night bonus went to Trevin Jones in the opening fight of the night. After taking a flurry of strikes and almost being put away in round one, there seemed little hope for Jones going in the second round, however, he managed to fight a huge right hand to finish the job and defeat Timur Valiev via TKO.

The final Performance of the Night bonus went to Shana Dobson for her upset victory over Mariya Agapova. After weathering the storm in round one Dobson came out fast in the second round quickly taking Agapova down and closing the show.