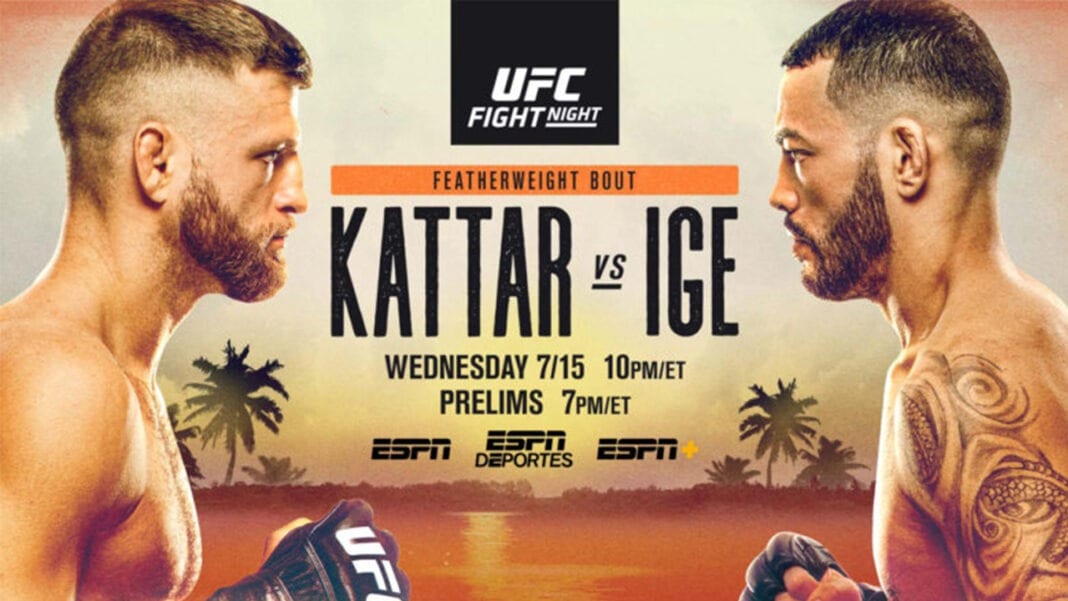 The island hosted the main event bout between #6 ranked Featherweight Calvin Kattar and #10 ranked Dan Ige. What was a back and forth striking match seemingly began with Kattar taking the first round. In the second round, the momentum began to swing with Ige landing a big shot on Kattar injuring his nose. The third and fourth rounds were both very competitive rounds that saw Kattar stuff many of Ige’s takdown attempts making it clear heading into the final round that Kattar was up on the scorecards. Ultimately the judges saw it for Kattar leading him to win by unanimous decision. Outside of the main event, this great night of fights provided plenty of moments warranting of receiving a bonus.

Fight of the Night came in the first bout on the main card between Mounir Lazzez and Abdul Razak Alhassan. Both high-level strikers, Alhassan came out immediately landed huge shots and looking as though the fight was soon to be stopped. Lazzez weathered the storm continuing to pick apart a tired Alhassan apart throughout the following rounds and secure himself the win.

The First Performance of the Night bonus was awarded to Modestas Bukauskas for him victory against Andreas Michailidis. Bukauskas edged out the exciting striking exchanges in the round landing a massive elbow right before the buzzer stunning Michailidis and making the referee call the fight off in between rounds.

The Second Performance of the Night bonus went to Lerone Murphy for his TKO victory against Ricardo Ramos. Ramos, who looked to grapple against Murphy was taken down and finished by the fighter in the final minute of the first round.

The Third Performance of the Night bonus went to Khamzat Chimaev for his dominant victory against John Phillips. Out the gate, Chimaev secured a takedown securing and beating down on Phillips for the majority of the round. Early in round two, it looks as though the same was about to ensue until Chimaev secured a darce choke to get the submission win and secure his bonus.