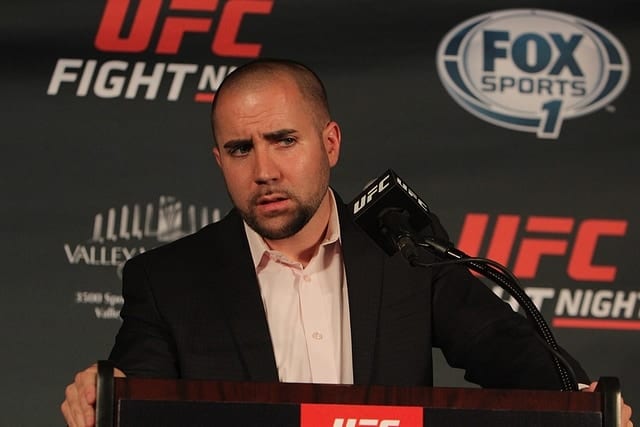 Rumors regarding the potential sale of the UFC have been swirling for months now, but the situation reached a new height yesterday (June 20, 2016) when a report surfaced indicating that one hundred percent of the promotion had been sold for a record setting $4.2 billion. Flocombat.com claimed that “a group consisting of WME-IMG, the Dalian Wanda Group, The Kraft Group and Tencent Holdings” had submitted the bid, and that the bid had essentially been accepted.

UFC Vice President of Public Relations Dave Sholler begs to differ, however, as he recently cited the reports as ‘false’:

“FloCombat.com’s report indicating that the UFC has been sold is false,” Sholler told MMAjunkie. “We’ve communicated that to our staff members tonight via an internal memo.”

The email in which Sholler referenced can be read in full below:

“A report today by FloCombat.com indicating that the company has been sold is false,” the email read. “This follows other false speculation in the press recently.

“Such misrepresentation of facts in the media negatively impacts our business, staff members and athletes. We have instructed our attorneys to investigate and take all appropriate legal actions against the parties publishing and contributing to these false stories.

“With International Fight Week and the historic UFC 200 rapidly approaching, we look forward to once again delivering a series of events that our fans won’s soon forget. We appreciate your hard work, diligence and commitment, and thank you for your focus as we continue to take the sport to new heights.”

The UFC has had a tendency in the past to shut down reports regarding huge news that they hadn’t yet announced themselves, but what do you make of the situation? The story regarding the potential sale of the UFC has been a popular one in recent weeks with some of the industry’s most well-respected reporters claiming that the move was almost a sure thing.

Stay tuned to LowKickMMA as more news regarding the situation unfolds.