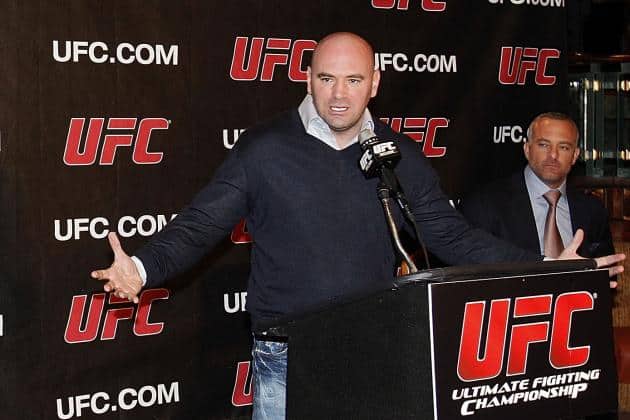 The UFC will finally speak out, give us some inkling of what the hell is going on right now, at a February 18th presser. UFC president Dana White and CEO Lorenzo Fertitta will hold a press conference to address the issues of PED (performance enhancing drug) abuse going on right now. As of yet, since the biggest drug bust of all time went down, we’ve heard absolutely nothing.

The promotion could somewhat play down the recent Jon Jones cocaine scandal, until it became apparent that they were playing it down and they had to slap the champion’s wrist. The PED busts over the past few weeks are impossible to ignore however, and indicate a problem that goes much deeper than many of us would’ve imagined.

So what will they talk about at the presser? Well, you can just about guarantee that White will be asked about how many fighters are juicing, and he will likely try to minimize damage of the company’s image. Truth be told though, that’s just not good enough. Many of us are starting to realize what it is we’ve been buying in to these past few years, and it ain’t pretty.

Long gone, we thought, were the days of juiced up gorillas beating the fluids out of each other for a cheap buck or two. Admittedly, Pride FC was a hoot, but also terribly corrupt and filled with steroid heads. The next time we were really faced with anything resembling that is when TRT (testosterone replacement therapy) came around, and the UFC tried to act like they didn’t know what that was.

Ignorance is bliss, but the portrayal of ignorance is falsehood. A touch of honesty would likely be much appreciated, and you’d hope that the promotion will just come straight out and say it; ‘we have a major problem, we need help, this is the plan’. Instead, there is a large chance that we’ll be spoon fed some crap about a ‘small minority’ and all that stuff.

The hard facts are this; we are buying in to this sport, as a global network of fans, and lies are becoming much harder to cover in the ever-growing world of social media and virtual communication. February 17th is the date of Anderson Silva and Nick Diaz‘s first hearing in front of the NSAC (Nevada State Athletic Commission), and that’s followed by the UFC addressing this PED issue as a whole on the 18th.