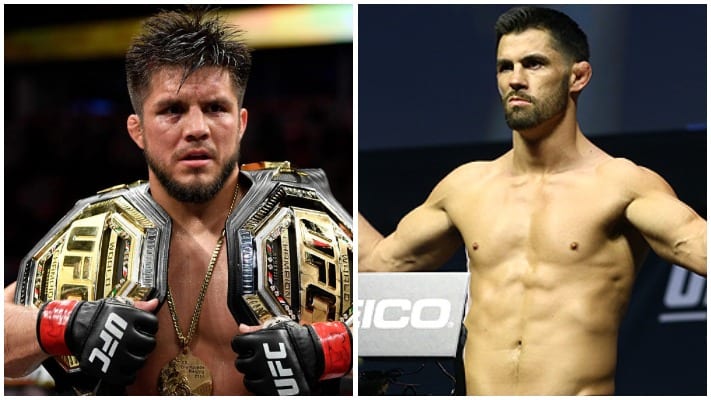 Cejudo captured the belt last time out stopping Brazilian knockout artist Marlon Moraes insides three rounds to do so. Ever since he has been searching for big fights and he’s got one at UFC 249 against one of the best 135lb fighters in history.

Cruz hasn’t fought since losing his bantamweight title to Cody Garbrandt almost four years ago. A plethora of injuries have hampered his career but he oozes confidence heading into this UFC championship fight.

Check out our staff predictions for Henry Cejudo vs. Dominick Cruz.

Jordan Ellis: Dana White says this would be one of the biggest upsets in MMA history if Dominick Cruz becomes bantamweight champion at UFC 249 and I totally agree with him. Henry Cejudo is in his fighting prime and I expect him to make quick work of Dominick Cruz. ‘The Dominator’ can’t be anywhere near his best at right now and for that reason I doubt he’ll make it out of the early rounds

Abhinav Kini: This all depends on what Dominick Cruz shows up. But unless Cruz has massively declined in the last few years, I really don’t see how Henry Cejudo gets the victory. The size difference is already huge, Cruz is adept at wrestling and I don’t see him being held down either, he won’t gas out and his movement and striking will be too much for Cejudo. I have Cruz winning the decision and becoming a champion once again.

Ryan Galloway: In the Co-main event of the evening I think Dominick Cruz will be crowned the Bantamweight champion once again by defeating Henry Cejudo with a Decision. I see the fight being close however I think his elusiveness and reach advantage will be the determining factors in Cruz’s victory. I think Henry has a good chance to catch Dom early and maybe we won’t see the Cruz of old and that could favor Cejudo however, if the best Dominick Cruz shows up it’s going to be an extremely difficult night out for Cejudo.

Ryan Maccarthy: There are some major historical implications on this fight, whoever pulls it out will be making some crazy history. In terms of the fight itself, I have a hard time picking against one of the most decorated combat sports athletes ever against someone that hasn’t stepped inside in the octagon in 3.5 years. If anyone can pull that off though, its Dominik Cruz, a legend in his own right. Cruz’ length, unorthodox style, cardio, fight IQ, etc. are all cause for concern for Cejudo. But like I said, I have a hard time picking against him. I think its super close, Cejudo retains via Split Decision.

Who do you think will win when Henry Cejudo and Dominick Cruz face off at UFC 249?