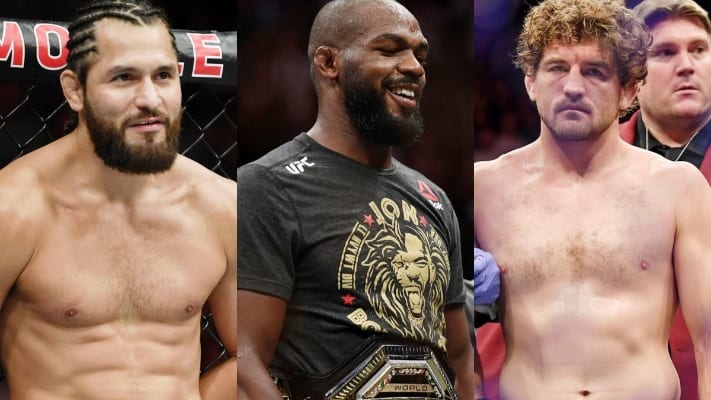 We had an incredible night of fights last night (Sat. July 6, 2019) at UFC 239. The show went even better than most expected it to. There were some stellar knockouts, some back-and-forth wars, some shocking outcomes, and a few fights that went the way most expected. You really couldn’t ask for more in a UFC card.

Where do the winners go from here? Where do the losers go from here? There were some great performances that made it tough to only pick five. Edmen Shahbazyan looked unbelievable, Marlon Vera did a great job, as did Song Yadong. Arnold Allen is really coming into his own. The whole main card was great.

We at LowKickMMA have decided on five great matchups to make after this great night of fights. Check them out below:

One person that really impressed last night was Song Yadong. This kid made his UFC debut at just 19-years-old, and has done nothing but put on incredible performances since. He’s now 4-0 in the UFC with three finishes. Yadong defeated 7-year-long UFC featherweight and bantamweight veteran Felipe Arantes via TKO in just his second UFC outing, before winning all three rounds against Vince Morales. Last night, he took out “The Ultimate Fighter: Latin America” winner, Alejandro Perez, via KO in round one; a guy that was 7-2-1 in the UFC, and only 21-years-old. He’s a prodigy to say the very least.

The fight I’d like to see him in next would be against fellow bantamweight prospect, Alex Perez, who’s ranked at No. 10 in the UFC Flyweight rankings, but has all sorts of problems making the 126-pound flyweight limit consistently. Perez is 2-0 at bantamweight thus far inside the UFC, and is 4-1 overall in the UFC, with his only loss being to Joseph Benavidez. Perez is a well-rounded, experienced fighter that I feel would be a great test for Yadong. I think they match up together very well. Yadong has passed all four tests thus far in the UFC with flying colors, and so has Perez, aside from fighting the eight-year-long top-three fighter in Benavidez.

I think this fight would be back-and-fourth on the feet, and I also believe we’d get to see a little more of Yadong’s ground game. Perez was a Regional Champion and an All-American wrestler in his second year in college. It’d be interesting to see how Yadong reacts to another well-rounded fighter pushing the pace against him. Alejandro Perez didn’t get to do much against him last night, but Alex Perez would be a great fight for Yadong to see just where he’s at.

How about a matchup between these two stud grapplers? At first, I liked a matchup between Askren and Darren Till; both are top ten guys that lost their last fights via vicious knockout to Jorge Masvidal. But I hate seeing guys go from undefeated to losing more than once in a row. Both men are coming off losses. Till made it to 17-0-1, now he’s 17-2-1. Askren was 19-0 (1 NC), and now he’s 19-1 (1 NC). Whoever would lose that fight would go from undefeated to losing either two or three in a row. Michael Chiesa said he’d accept nothing less than a top ten opponent next, so why not Ben Askren?

While looking at the mid-to-lower half of the top 15 welterweights, most are booked for a fight already except for Neil Magny, Elizeu Zaleski dos Santos, Demian Maia, and Santiago Ponzinibbio. Magny is suspended, a matchup between dos Santos and Ponzinibbio would be intriguing considering they’re both on seven-fight win streaks at welterweight, and Chiesa has three submission losses, so even as good of a matchup as a fight with Maia would be, it’d be a little harder to get people excited for.

This would be a great match up to see where each guy’s skill-set is at. Chiesa is an incredible talent. His grappling is unbelievably good, he has a perfect mixture of BJJ and wrestling, as does Askren. Now that ”Maverick” is at welterweight, he has the energy and strength to let his skills flow the way they should. Honestly, that may be the reason he’s been submitted three times; the weight cut was too much and it made his head foggy, let alone not having the energy to work his way out of them.

As for ”Funky,” everyone seems to think he’s overrated now that he has finally suffered defeat. This fight will be a perfect test for each of them to see how good they are, and where they should go from there.

Perhaps Askren would be the favorite, but what Chiesa did to Diego Sanchez, no one across four weight classes has ever been able to do. Sanchez may be 37 now, he may not be the fighter he once was, but out-grappling him isn’t an easy feat for anyone, and Chiesa did it swiftly. As for Askren’s health, he needs to let his brain recover, and a fight with someone who most likely won’t try to knock him out would probably be ideal for his next outing.

”’Gamebred” says he wants a title shot next, as he said after his last win as well, but let’s be honest, if Colby Covington defeats Robbie Lawler next month, he deserves the shot more than anyone. He’s the Interim UFC Welterweight Champion, or at least was, but never lost his belt. There’s a reason there was a title on the line when Covington fought Rafael dos Anjos. The winner, when healthy enough, was supposed to unify their title with Tyron Woodley‘s. With that being said, this is a great fight to make.

Tyron Woodley just pulled out of his rematch with Robbie Lawler because of a hand injury, hence the reason Covington is fighting him a month later. As long as Woodley can return by the end of the year, why not make this fight for the No. 1 contender after Covington (if he wins on Aug 3) fights Kamaru Usman for the belt? This division is a little held up at the moment considering the champion is hurt as well, but in the meantime, this fight could take place. Masvidal just KO’d Ben Askren in five seconds, why not go for his teammate, and according to most, the No. 2-ranked welterweight of all-time next?

This fight presents an exciting matchup, as Woodley has better striking than Askren, he most likely wouldn’t get starched in five seconds. Masvidal is on fire right now and has two big knockout wins this year. Both of which are already early Knockout Of The Year candidates. However, that’s as far as his win streak stretches. He lost his last two fights just beforehand. One more win and he’ll be impossible to deny, but right now, Covington is still likely next. Not to overlook Robbie Lawler. If Lawler beats Covington, then Masvidal should certainly be next in line.

The styles of Masvidal and Woodley would make for a great fight. Masvidal isn’t going to out-wrestle Woodley like Usman did, but he will push the pace, and he will strike with him. This would likely bring out the best in both men. Masvidal’s kickboxing is just incredible, and he’s tough as hell, but Woodley is perhaps a top-three hardest hitter ever at 170 pounds.

We will have a better idea of what’s next for Amanda Nunes in the coming weeks, considering there’s No. 1-contender fights at both bantamweight and featherweight this month. Neither of these fights are guaranteed title eliminators, but the winner of each of them will be deserving of the next shot. We have three-time amateur MMA champion and undefeated professional Aspen Ladd taking on the former Women’s UFC Featherweight Champion, Germaine de Randamie. Both of these women are undefeated kickboxers. De Randamie’s record sits at 37-0 in the art, and Ladd’s at 8-0.

Ladd will improve to 9-0 (4-0 UFC) in MMA with a win, and de Randamie would improve to 9-3 (6-1 UFC) and a five-fight win streak. ”’The Lioness” could choose to defend her UFC Bantamweight Championship against the winner of that fight, or to defend her UFC Featherweight Championship against the winner of Cris Cyborg and Felicia Spencer. Of course, a rematch with Cyborg would be more appealing to most. However, we’ve never seen her fight Spencer, who shocked the MMA community with her dominant win over Megan Anderson at UFC Rochester.

Spencer won the Invicta FC Featherweight Championship just before joining the UFC, and Cyborg is, of course, the former Women’s Champion of Strikeforce, Invicta FC, and the UFC. It’s been said that Nunes will defend her featherweight title for the first time in her next fight, but we all know that in MMA, all sorts of curve balls are thrown, and what’s said to be happening, doesn’t always happen. Nonetheless, all of these fights are intriguing, and all four of these opponents are former champions.

After watching Jan Blachowicz‘ impressive performance last night, the argument could be made that the heavy-handed light heavyweight deserves to be next in line for the title shot at 205 pounds. Yes, he was knocked out in his second-to-last fight, but the one to knock him out (Thiago Santos) just fought Jon Jones for the belt on the same card, and actually did very well against the champion. Blachowicz knocked out former Strikeforce and UFC Middleweight Champion Luke Rockhold last night in the second round, after almost knocking him out at the end of round one. Blachowicz is a very well-rounded fighter. He has a BJJ black belt and holds a record of 34-0 in kickboxing. He also showed off his kickboxing last night, and it looked quite impressive.

Blachowicz had a bit of a rough start to his UFC career. After upsetting Ilir Latifi in Sweden, he would go 1-4 in his next five. Since then, he’s gone 5-1 with the only loss in that span being to Thiago Santos. Jon Jones had a very interesting approach to his fight last night, as he merely pursued Santos defensively the entire time without really landing any effective strikes. It makes one wonder what Santos could’ve done had he not injured his knee. Since the champion’s return at UFC 232, he has had a noticeably different approach to the game. Jones used to go for broke and throw anything and everything with reckless abandonment before he started fighting a little more tactically. Now Jones more or less fights not to lose.

It was a very unusual performance from him, and I thought he could’ve easily given his belt up. Not that he looked terrible, but he just didn’t do much. It could’ve gone 48-47 either way. When the fight was over, Jones pretty much said he didn’t do too much because Santos is a black belt in Muay Thai. When asked why he didn’t try and take the fight down, he answered because he felt he was winning the fight.

Firstly, it’s kind of sad that Jones is that content with coasting, he never seemed to be before. It’s absolutely okay to win decisions, there’s nothing wrong with not being able to finish your opponent, however, not trying whatsoever to do anything effective – that’s unfortunate. Secondly, ”Marreta” was on one leg for the majority of the fight.

A guy like Jon Jones should have been able to out-wrestle him. If this was the way he normally wins, it wouldn’t be much of a talking point. But this is just so out of character for Jones that it’s kind of nuts. Is this the new Jon Jones? And if so, how does this version of “Bones” matchup with Jan Blachowicz?