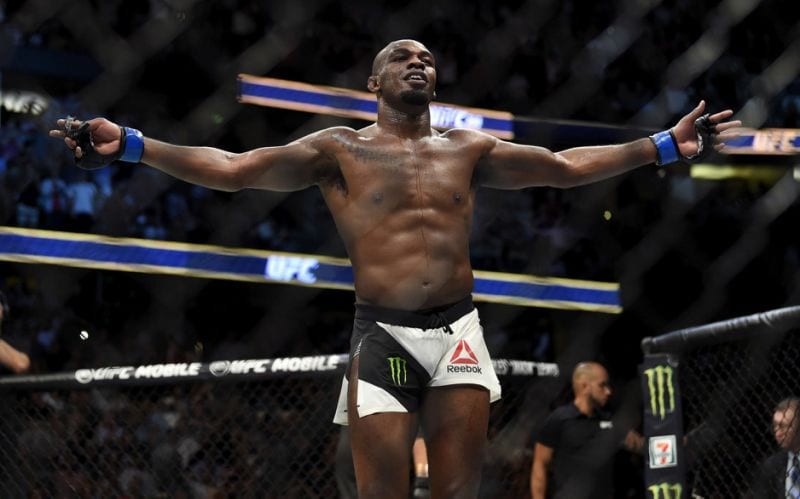 Light heavyweight champion Jon Jones will defend his title against Anthony Smith in the main event of the evening at UFC 235.

As always, LowkickMMA will have you covered with all the UFC 235 results as they break.

Jones (23-1) will defend the light heavyweight title for the first official time in over three years on Saturday night. It’s time to see if “Bones” is still unbreakable. As for Smith (31-13), the journeyman fighter has won six of his last seven fights. With the last three wins in a row being in the 205-pound division.

The fighters take to the center of the Octagon. Jones throws a push kick to start. Smith throws a hard leg kick. Smith looks composed as Jones loads up a left hand. Jones lands a spinning back kick followed by a calf kick. The champ throws an ax kick but misses the mark. Smith another leg kick. Jones whiffs on a big left hook. Jones lands another spinning back kick to Smith’s body. Smith lands a left head kick but Jones catches part of the kick and muscles Smith into the cage. Smith lands a knee in the clinch as they separate. Smith keeping a good distance and keeping calm thus far. Less than a minute to go in the round. Jones lands a hard side kick to Smith’s body. He follows with a head kick. Jones lands a side kick to the body again at the end of the round.

Smith takes the center of the cage, Jones quickly moves him off and lands an elbow. Jones shoots then switches to land a knee to the body. He wrestles Smith back to the cage and lands some punches to the legs of the challenger. The action slows a bit. Jones fires off a knee to the midsection of Smith, then he lands one to the leg. Smith gets worked here in round three. Jones digs the body and slams Smith to the canvas. Jones looks for a front headlock but Smith defends for the time being. Less than a minute to go in the round and the champ slams some knees into the shins of Smith. Jones is controlling the body of Smith as the bell sounds.

The fighters meet in the center to start the fourth frame. Jones throws a flying side kick that misses. He lands a body punch that hurts Smith. Jones lands an elbow and lands another one. Smith is hurt. Jones rips the body and throws a flying knee. Smith clinches as Jones throws him to the ground. Jones follows him to the canvas and lands some punches. He maneuvers around behind Smith and starts to unload some hammer fists. Jones is looking to take his back but Smith gets back to his feet. However, Jones tosses Smith back to the ground. He smashes some right hands to the face of Smith. Then some elbows. Smith has nothing for Jones. Jones winds up a huge knee to the body. He follows it up again. Jones lands another knee to Smith’s body. Jones backs up and throws a knee that hits Smith’s head. Herb Dean steps in and calls time. He takes two points from Jones. This could make things interesting. The round ends.

Smith takes the center to start the last round. Jones pops an uppercut. Smith fires a right hand. Jones looks for a takedown but Smith defends. Smith throws the right hand again as he is looking for the one-punch KO. Jones lands a leg kick and closes the distance. He presses Smith into the cage and digs the body. The action slows. Jones lands some punches to Smith’s hamstrings. Halfway through the last round. Both fighters trade knees in the clinch. Jones tries to bully Smith to the ground, Smith defends. Jones lands an elbow as he claps his hands around Smith’s body. Less than one minute in the fight. Jones stomps his feet. He digs the body. Jones separates and lands a flying knee.