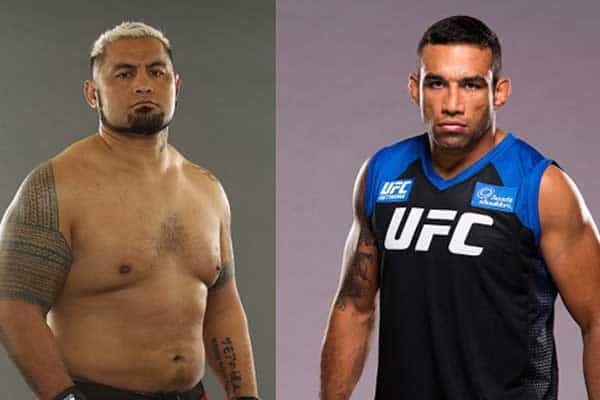 UFC 180 hits Mexico tomorrow night (Saturday, Nov 15th, 2014) with Mark Hunt vs Fabricio Werdum as the main event. Hunt’s Cinderella story has captured the hearts of millions of fans worldwide, but Werdum is looking to dampen the parade and snatch the interim belt. What has become obvious this week is that the high altitude and harsh two-week weight cut is taking toll on “The Super Samoan”.

With so much hanging in the balance, and so many variables to consider, check out the LowKickMMA Mark Hunt vs Fabricio Werdum fight breakdown:

Hunt is a K-1 level striker and, like Mirko Cro Cop in the early 2000’s, he has transitioned his trade well in the world of MMA. You only need to look at Hunt’s finishes over guys like Cheick Kongo, Stefan Struve and the formerly unfinished Roy Nelson to realize the calibre of his stand up. Werdum may have improved since joining Wandy and co. at King’s MMA, but not enough to trade with Hunt.

High altitude/weight cuts be damned, “Vai Cavalo” is at a severe disadvantage on the feet. I wouldn’t be at all surprised if Werdum doesn’t commit to any striking exchanges early on, given that Hunt puts out more lights than power cuts. The one-punch factor is a huge one here 70-30 Hunt

Believe it or not, Mark Hunt has better takedown success and defense than his opponent at UFC 180; “The Super Samoan” has stuffed a whopping 84% of attempted takedowns, and is successful in 6 of his 12 attempted. Werdum has stopped 50% of takedowns attempted on him, and is only successful in 5 from 17 at a percentage of 29 in attempted. Strange but true….

Hunt’s huge legs and low centre of gravity actually make him pretty hard to take to the ground, which clearly plays in to his advantage on fight night. If Werdum can’t get this fight to the ground, he won’t be in a position to attempt any submissions. All factors considered, including how tired Hunt looks this week, I’m actually calling the takedowns 50-50

Clearly this is Werdum’s territory, as a multi-time world champion grappler, and where he will want the fight to play out. Hunt isn’t exactly easy to take down, or even submit, but the fact he punches like a truck pretty much makes the ground game the only option for “Vai Cavalo”. Although we’ve only seen Werdum submit one in his last four wins, it was fellow world class grappler Antonio Rodrigo Nogueira, who had never tapped before (ed note: he snapped against Frank Mir).

Hunt has lost six times by submission, but only one has come during his UFC tenure. Again, I feel the altitude and weight cut plays a big role in how tired “The Super Samoan” will get on the ground, factoring in to my decision of 70-30 Werdum

So it’s a tale of two fights really; if it stays on the feet, I would bet that Werdum’s ear will be wobbling like it did against Junior Dos Santos. If Werdum can get past Hunt’s stern TDD, then we might see the fan favorite tapping within minutes. What are your thoughts on Mark Hunt vs Fabricio Werdum at UFC 180?