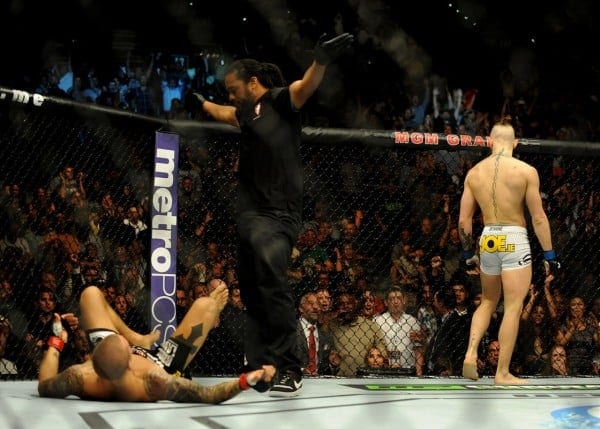 Rising to superstardom like few UFC athletes ever have before, Irish featherweight sensation Conor McGregor picked up his fourth straight UFC with a first round TKO of No. 5-ranked Dustin “Diamond” Poirier on the main card of last night’s (Sat., September 27, 2014) UFC 178 from MGM Grand Arena in Las Vegas, Nevada.

Earning a $50,000 “Performance of the Night” bonus for his finish of the hard-nosed Poirier, McGregor spoke up to UFC on FOX right after the fight, bringing the belt with him and deeming it “already his”:

He called out for a title shot against Jose Aldo or Chad Mendes, who square off in the main event of October 25’s UFC 179 fro Rio de Janeiro, Brazil. That may not happen just yet, but it’s clear that McGregor is now very close to a shot at UFC gold, a goal that he could accomplish in his next fight.

In the meantime, check out the highlights of “Notorious’s” latest and greatest victory from UFC on FOX below: