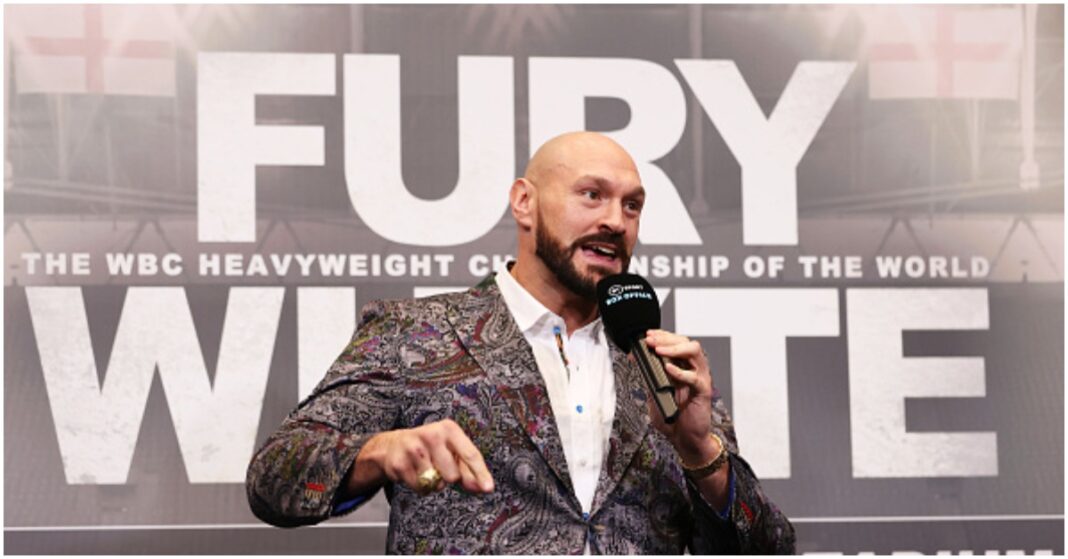 After a big Twitter dispute between Tyson Fury and Conor Mcgregor on the weekend of the Superbowl, Fury has finally addressed what happened.

It was big news as it was going on, but now that it’s died down, the WBC heavyweight boxing champion has basically said it wasn’t really as serious as it seemed.

Speaking to reporters at the press conference of his next fight against Dillian Whyte, Fury opened up about the Twitter spat with Mcgregor (transcribed by Mirror.co.uk) “Bit of a publicity stunt. Super Bowl weekend, all eyes on us,” Fury said.

“Beef? Man’s 10 stone [I’m] 20 stone behave yourselves, only beef we would have is me eating him in a beef sandwich.”

The Origins of the Tyson Fury and Conor Mcgregor Beef

The argument started when “The Gypsy King” made a post on Twitter applauding Khabib Nurmagomedov and his MMA accomplishments. Unsurprisingly Mcgregor would take issue with Fury giving praise to his biggest rival, and made his thoughts known in a now-deleted tweet.

“Yup the Joyces. Big Joe ! U bottled it with Billy joe Da, what were you doing there ? ULeft him, Versace tw*t U.Done.Nothing. Ya’s did it right ye right hahahahaaj. Even when I’m wrong i’m right. Who did it right ? The Mac daddy tonight, in house. Miami d12! Bahamas [B.S.].” Mcgregor scoffed, talking about the time Tyson Fury stood by as Billy Joe Saunders’ dad jumped a barrier to come to his son’s aid and was roughly assaulted by security.

“come back when u win a fight mush, & the difference in me & you is i don’t get myself in trouble & people actually like me, your just a bully who hit old man, & yes Big up the hulk Joe, #morecambebay. in the house,” Fury replied. And in a different tweet: “@TheNotoriousMMA has done more tapping then MJ,s old dance shoes.”

It was a silly argument, made sillier by the fact that at the time fans thought the two were serious. Now, they can all breathe a sigh of relief as it was all a joke after all.