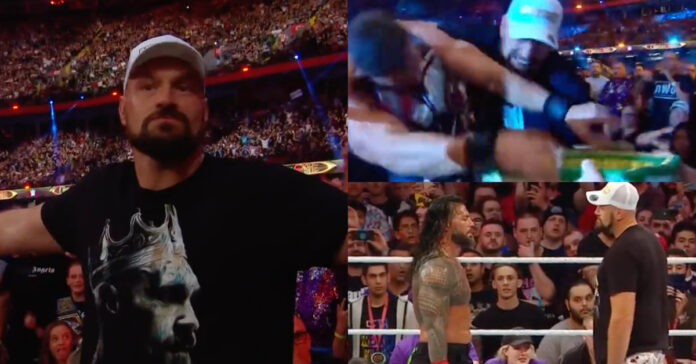 Tyson Fury returned to a very different ring at the WWE Clash at the Castle.

Former two-time boxing world heavyweight champion Fury announced his retirement after his last outing against WBC mandatory challenger Dillian Whyte. Fury put on a dominant performance and secured a brutal TKO finish before declaring that he would be hanging up his gloves.

In a shocking appearance at the WWE Clash at the Castle this past Saturday, Fury interrupted the expected proceedings during the main event of the night. He knocked out pro wrestler Austin Theory, who was looking to cash in his Money in the Bank briefcase, in front of a roaring crowd at Principality Stadium in Cardiff, Wales.

English wrestling sensation Drew McIntyre endured a tough night at the office against the undisputed WWE universal champion Roman Reigns. While they were battling it out for the title, Theory tried to cash in his instant title shot with the briefcase. As he rushed to the ring with a referee, Fury, who was in attendance ringside, took notice of the opportunistic move and knocked out Mr. Money in the Bank with a vicious right hand.

Meanwhile, McIntyre was able to recover and went on to drop Reigns with a Claymore. Solo Sikao, a cousin of The Head of the Table, interfered by pulling the referee out of the ring to prevent a defeat for Reigns, who managed to land a Spear on McIntyre while Sikao distracted him.

Tyson Fury congratulated Reigns and helped McIntyre get back up before heaping praises on his compatriot. He insisted that McIntyre did his country proud and doubled down on the sentiment by banging out a personal rendition of the song American Pie as the crowd sang along with the undefeated boxer in celebrations.

You can watch the surprise appearance of Tyson Fury in the WWE ring below.