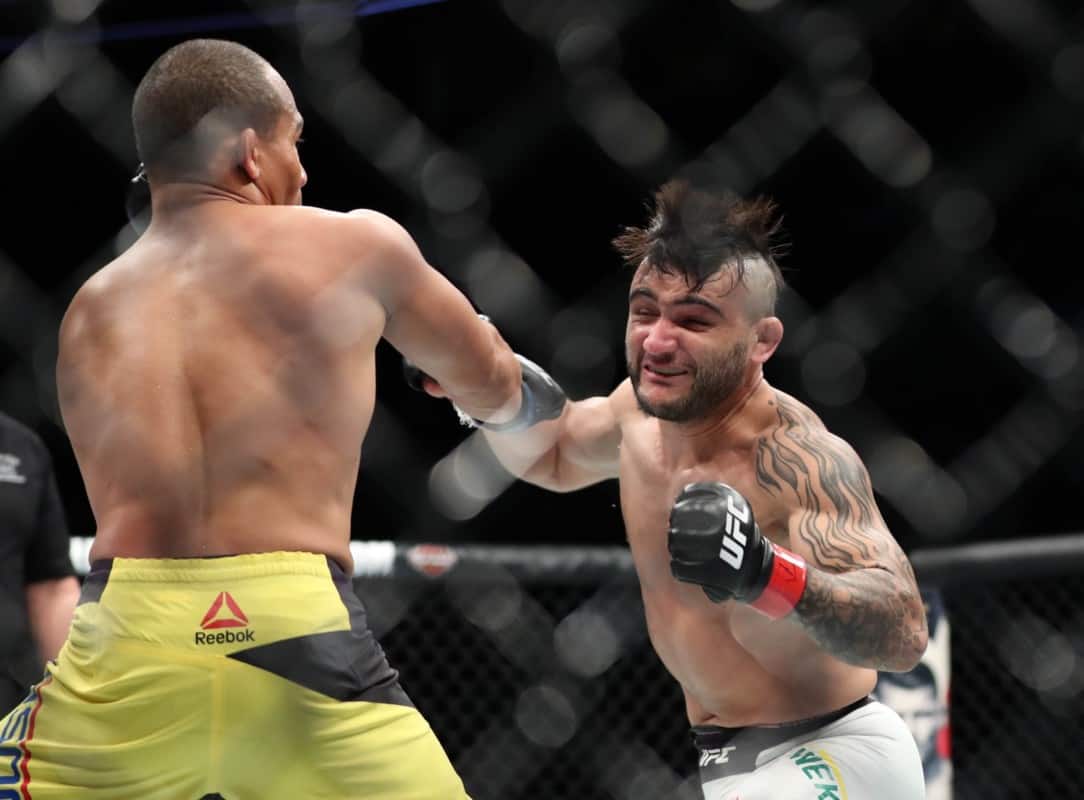 UFC Portland popped off from the Moda Center in Oregon’s largest city tonight (October 1, 2016). The main event pit former flyweight knockout artists who have since climbed the scale up to bantamweight, John Dodson and John Lineker. The Brazilian, who had well-documented troubles making the 125-pound limit at flyweight, did not leave his troubles with the scale behind. Lineker once again failed to make weight.

The two diminutive punchers went at it for the full five rounds, bashing each other with hard shots all the while. The crowd became restless with Dodson’s movement and reluctance to engage at times, but he remained effective with his offense nonetheless. ‘The Magician’ was particularly effective with his kicks, catching ‘Hands of Stone’ flush to head more than once. But Lineker continued to press forward and land thudding punches to the head and body. The Brazilian escaped with a split decision victory, but many fans were split on who they thought the victor was.

The co-headliner saw former Bellator champion ‘Ill’ Will Brooks in his sophomore UFC effort take on Alex Oliveira. The Brazilian ‘Cowboy’ also had serious trouble finishing his weight cut, actually coming in 5.5 pounds above the non-title lightweight limit of 156.

The size difference was evident from the get-go, and Oliveira made it work to his advantage. He had success in the clinch with his size and strength advantages and hurt Brooks’ rib with a knee. The injury worsened as the fight wore on, and by the third round, Brooks was grimacing in every position. ‘Cowboy’ pounded out the obviously compromised Brooks, and then taunted him by doing a crotch chop and a chin flip. An incensed Brooks staggered to his feet to pursue Oliveira and threw his mouthpiece at him when referee Herb Dean held him back. Brooks then collapsed back to the canvas in agony, the momentum he carried over from Bellator at an abrupt end.

The main card kicked off with The Ultimate Fighter (TUF) 24 contestant Brandon Moreno taking on the biggest favorite on the card, Louis Smolka. ”Assassin Baby’ snatched a first-round high-elbow guillotine choke for the biggest win of his career. Moreno was making a short-notice debut for the injured Sergio Pettis. After losing his fight on the show, Moreno no longer has to worry about sticking around the big show.

Check out MMA Twitter’s reaction to these exciting scraps below:

It definitely pays to cheat in MMA. If you can get away with it, DO IT. Rewards much bigger than the small penalties.

This is about to be a scrap! #UFCPortland

This is about to be a scrap! #UFCPortland

HIS BRAIN IS UNKILLABLE pic.twitter.com/hz4dLsew00

Dodson better not get caught against the octagon! Lineker throwing heat!! #UFCPortland

No balls of steel, I'm afraid.

In case it wasn't clear before, these two men aren't made of human stuff. pic.twitter.com/G0QTTT1VHu

Dodson is fighting like he feels sorry & trying to make up for the nut shot by getting into exchanges with Lineker. No #FightYourFight

Rogan once described a Lineker fight as his opponents backing up like he's wielding a knife. What a great, accurate call that was.

Massive exchange and Lineker got the better of it. This is getting fun.

Lineker did not care what he hit there. Just fired a volley at anything vaguely resembling John Dodson.

Lineker is like a fucking horror movie monster. He can't be killed and he just keeps coming for you. #UFCPortland

Finally someone who can fight though

John Lineker is an insane person.

This fight is what we thought it would be! pic.twitter.com/QOo9tBnNLc

Tough fight!!! Who u guys got? @FS1 #fightnight

Faux-Cowboy looks at least a weight class higher than Brooks. Probably explains why he tanked at the weigh-ins so bad. #UFCPortland

Please Herb. Break these clinches after 20sec of a clear stalemate. Easier to get TDs on shot entries#UFCPortland

Only because the Maia was sold out. https://t.co/NPpAclp3Kv

Today we learned that Will Brooks is not a welterweight.

Scores could be anywhere. Brooks trying to keep momentum against a guy who's using his size and didn't make weight. Frustrating.

Cowboy Oliveira is not cool, bro.

Cowboy Oliveira wins via TKO. Then crotch chops Brooks and flips him off. Brooks gets up and throws his mouthpiece at Oliveira.

Brooks crumples back down to the mat in pain. Brooks did not like how Oliveira was celebrating the TKO.

Misses weight. Talks shit. Gets mouthpiece thrown in his face. Such is life. #UFCPortland

Sighhhh I don't know about that one. 5 lbs over weight… #UFCPortland

OH SHIT HE DID THE CROTCH CHOP

Damn hit him wit the DX suck it sign! Lol

Has DC never seen a classic mob movie? How does he not know the chin flip? #UFCPortland

The crotch chop is never the right call. #UFCPortland

This is the 3rd time in four UFC events that some sort of physical altercation either did happen or almost happened post-fight. #UFCPortland

Exactly. I'm all for getting into a fight. But you just look pretty silly doing all of that. Class in victory and class in defeat. https://t.co/P9UdkRrhjQ

Nobody puts "Assassin Baby" in a corner! #ufcportland

YES!!!!!!!!!!! The son of a pinata maker with another karma win for the night. Well done Moreno! #UFCPortland

That is unreal. Wtf! I can't believe that just happened. #ufcportland

Ha. So shocked I messed that up. Holy Smolka! Late replacement Brandon Moreno taps Smolka with a guillotine. What an upset. https://t.co/QGgzwHYd3P

Raise your hand if you're a Brandon Moreno fan. pic.twitter.com/Zj7JffGCcT

So if the 16th seed on TUF can beat the 9th ranked UFC flyweight, can the TUF 1 seed beat the UFC champion?

No he can't. But that was fun.

You know the submission is nasty when you're watching it like #UFCPortland pic.twitter.com/uCtIupuJvl

That's the beauty of this sport. On any given night, when that cage door closes, the numbers don't matter. Its any mans night.