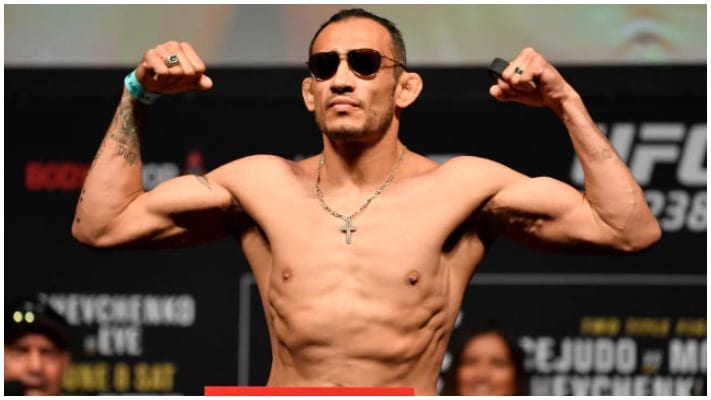 Former interim lightweight champion Tony Ferguson is no longer concerned with becoming the undisputed king at 155lbs and has likened his pursuit of the title to a “wet dream”.

‘El Cucuy’ is set to return from his dominant defeat at the hands of Justin Gaethje who stopped the fan favourite in the fifth round of their UFC 249 main event earlier this year. Ferguson will square off against Charles Oliveira who is currently riding an impressive seven-fight win streak heading into the bout at UFC 256 and expects a title shot if he gets by Ferguson.

Speaking at the UFC 256 virtual media day, Ferguson told press including LowKickMMA that the thought of winning another UFC belt didn’t really appeal to him, he said.

Ferguson is not thinking about if he will or won’t get a title shot by beating Oliveira after spending so many years chasing it.

“Man, that title is a wet dream,” Ferguson said. “Like that Farmers Insurance commercial: ‘Oh, you almost got it. Keep it going. We’re just going to keep dangling it in front of you.’

“I don’t know what the problem is. I don’t know if it’s because I’m Mexican. I’m American with Mexican parts. Twelve-fight win streak. Eight years in the making, before women’s sports were even in. Conor (McGregor) was on welfare. … All these different things, and I still didn’t earn a title shot.” (Transcribed by MMA Junkie)

Do you think Tony Ferguson will get a shot at the undisputed title before he retires?