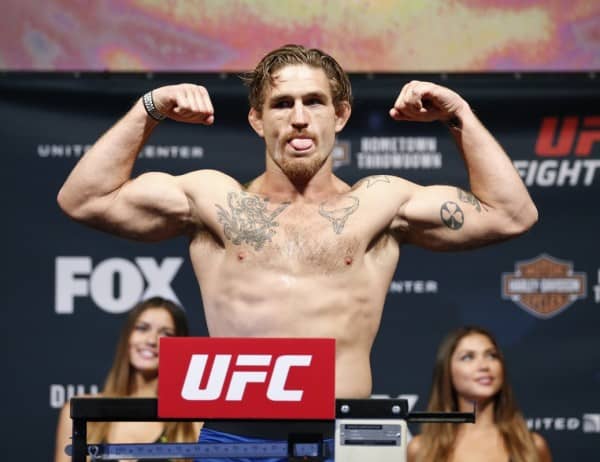 Tom Lawlor has long been known for his colorful, entertaining weigh-in entrances that have ranged from him dressing up as UFC legend Dan Severn to painting a massive ‘Just Bleed’ across his chest.

The ‘Filthy’ one recently returned to light heavyweight following an over two-year hiatus to take on the talented Gian Villante at last weekend’s (Sat., July 25, 2015) UFC on FOX 16 from Chicago, starching the East Coast native with a picture perfect right hook to end the preliminary card with a big bang.

But despite the rousing success, Lawlor also returned to a new UFC landscape, one where individuality has been traded for the big money and consistent look of the UFC’s new uniform sponsorship deal with Reebok. That means Lawlor’s famous weigh-in entrances were now a thing of the past, but that doesn’t mean he wasn’t going to try to rekindle some of that old fun.

Speaking during an appearance on yesterday’s (Mon., July 27, 2015) episode of The MMA Hour, Lawlor said that he tried to come out dressed as interim featherweight champ Conor McGregor, but those in charge of Reebok outfitting wouldn’t let him. Lawlor believes that to be at the root of a disconnect between the fighters and Reebok:

“My plan was to be Conor McGregor at the weigh-ins, so I had asked if I could wear the Conor McGregor fight kit. You know, they give you the Reebok stuff and they said, ‘do you have any questions?’ I said, ‘yes, I have a question. Can I wear Conor McGregor’s fight kit?’ And the way it was met, to me, was like, ‘why would you want to do that? Why would anyone want to do that? Don’t you want your family to buy these jerseys with your name on them?’ So right there, it clued me in that perhaps the people that were in charge of some of this stuff weren’t as familiar with the product as I would’ve liked.

“That’s what the fans know me as,” Lawlor continued. “Now, I don’t expect everybody who’s an MMA fan to know about me. There’s 500 guys in the UFC. Everybody has a different personality, stuff like that. But instead of saying, ‘okay, we’ll look into it,’ it was kind of like, I was insulted basically.”

Lawlor said that Reebok gave him an insane amount of gear to wear at the weigh-ins; so much that he couldn’t actually put all of it on at once. He did say, however, that he tried to pile all of it on himself similar to the infamous ‘sellout’ scene of the classic movie Wayne’s World, where Dana Carvey’s Garth shows up swaddled in all Reebok. Lawlor had a new twist on that, planning on wearing two pairs of Reebok shoes and coming out on all fours:

“I did not wear all of it,” Lawlor said, laughing. “There were, I think, two more pairs of socks and three more pairs of underwear, but it got to point where I felt like, okay, if I really go out there and put everything on in this bag, somebody might get pissed as me. There might be some backlash, so let me tone it down a little bit. I was actually at one point going to put another pair of shoes on my hands and walk out with those on all fours like Khabib Nurmagomedov’s buddy, the bear. But unfortunately I’ve got to save something for the future for now.”

The always-entertaining ‘Filthy’ is back in the incredibly shallow light heavyweight fray, and with devastating knockout power in hand, it appears that the time off has done him good. He’s always been known as one of the most fun-loving fighters in the UFC, but he changed his tone in closing by saying perhaps it’s time for him to take things seriously for his legacy:

“[The costumes are] part of the fun, but I’ll kind of let the result and the performance speak for itself at the end of the day,” Lawlor said. “Maybe I shouldn’t be looking to have fun? Maybe this isn’t a fun time; maybe I’ve just had it all wrong for the past few years? You never know.

“I’m getting a little long in the tooth, and it’s time to make people realize that I put a lot of hard work, I put a lot of dedication into this craft,” Lawlor said. “I’ve doing it for years and years and years, basically since I was a teenager, since I was 12 years old. I saw UFC 2, and I’ve been building up to these moments my entire life. I don’t want to be looked at as a guy who just went out there and squandered opportunities.”