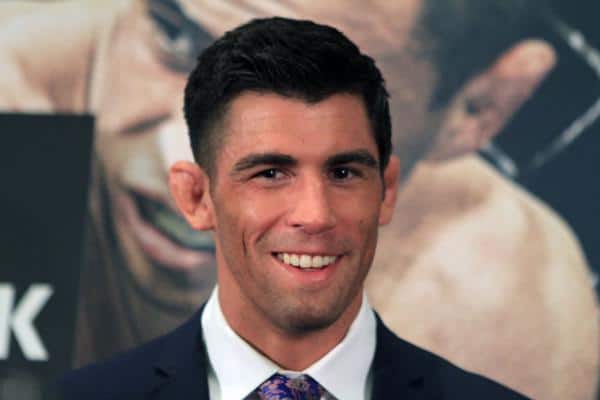 UFC bantamweight champion TJ Dillashaw secured the victory in the rematch with Renan Barao with a devastating combination at UFC on FOX 16 last night (Saturday July 25th, 2015). In doing so, the Team Alpha Male product secured his spot as the undisputed king of the 135-pounders, and set himself up for perhaps a more anticipated fight than his second showdown with Barao. That’s right, we’re talking about ex-champ Dominick Cruz.

‘The Dominator’ has sat outside the division since a run of bad injuries that started in 2011. Cruz was granted a shot at Dillashaw and the title after a brief comeback in 2014, which saw the returning Cruz smash an overmatched Takeya Mizugaki. Succumbing to yet another injury, Cruz once again had to sit dormant as ‘The Viper’ went on to beat Joe Soto, and then come full circle against ‘Baron’. It’s an obvious choice for the champion’s next bout, obviously assuming that Cruz will be making a return at some point this year.

Speaking at the UFC on FOX 16 post-fight presser, ‘Killashaw’ not only calls out Cruz, but says his power advantage will win the day:

“That’s the biggest fight,” Dillashaw said. “That’s what’s going to make my name the biggest is fighting Cruz … as soon as he’s able to come back.”

He’s a very elusive, high-paced fighter as well,” he said of Cruz. “I just don’t think he has the power behind his punches. I don’t think he has a devastating threat that you can impose on someone. I see myself definitely winning that fight.”

Cruz’s skills have seen him unbeaten in 11 fights, and the only reason he had to relinquish the belt in early 2014 was because of yet another groin injury during camp for the champ of the time, Renan Barao. Talking with Inisde MMA recently, ‘The Dominator’ says he is coming back for ‘his’ belt:

“My goal is to try to be back by the end of the year. That’s my goal. I’ve already had my title stripped. I’ve already been dropped out of the rankings. What do I need to rush for is the way I’m thinking right now. Every thing that I’ve earned has already been taken from me,”

“I want to go out, into this next fight, very healthy, and I definitely want to fight for the title. I don’t care who has it. I believe I’m the best in the world. I believe I never lost that position. The only thing that we’re waiting for is for me to come back and earn it.”

So it looks like the bantamweight division could have the next title fight sewed up already, but it’s all dependent on the man who has fought once in four years; Dominick Cruz. Many argue that Cruz is actually the Godfather of TJ Dillashaw’s style, and subsequently it would make for great watching if/when the two meet.

TJ Dillashaw vs. Dominick Cruz? Yes please, and it’s about time too!