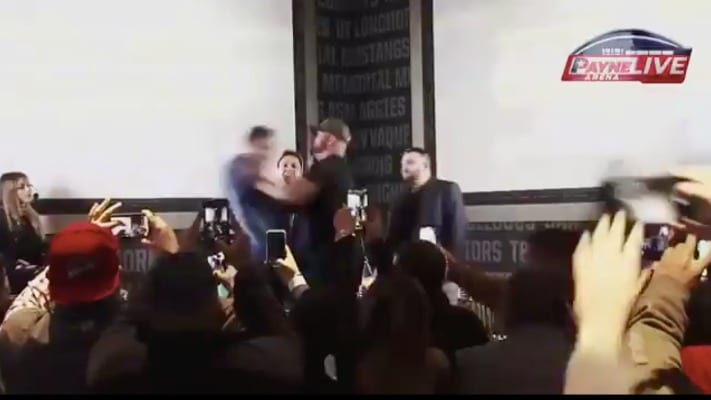 Tito Ortiz returns to fight Alberto Del Rio December 7 as the two fighters are featured as the main event of the upcoming Combate Americas event.

The Hispanic mixed martial arts (MMA) organization has UFC pioneer Ortiz and WWE legend Del Rio making media appearances for the “Winner Take All” bout. Stakes have begun to heat up between the two. Most notably, during their most recent face-off. MMA Mania has video of Ortiz shoving Del Rio, which led to a friendly exchange of words between the two fighters.

In a case of when keeping it real goes wrong, Alberto El Patron and Tito Ortiz get a bit pushy prior to their December 7th fight for Combate Americas. pic.twitter.com/mP2cQYCi94

Despite being in the UFC Hall of Fame, Ortiz is now 44-years-old and is far removed from his prime. Ortiz was last seen in his controversial trilogy bout with rival Chuck Lidell just last November. The event was scrutinized and did low PPV numbers estimated at around 40,000.

Ortiz is looking for even more luck this time around as the upcoming PPV event in Hidalgo, Texas has belt implications. The heavily favored Ortiz will be putting his UFC light heaveight championship on the line. On the other hand, Albert Del Rio will be bringing his own WWE belt to the table.

Oddsmakers currently have Del Rio as a +525 underdog. Ortiz comes back as a -725 favorite. Despite being known for his work in the WWE, Del Rio has a 9-5 MMA record. In fact, all nine of his wins have been via stoppage. However, it has been nine years since the 42-year-old has fought in a cage with no script.

One individual who sees nothing but success for Ortiz vs Del Rio is Combate Americas CEO, Campbell McLaren. (H/T The Monitor)

“This is a one-of-a-kind, larger than life – one of the greatest MMA superstars of all time, facing off with one of professional wrestling’s most decorated champions and an accomplished MMA fighter in his own right.

“On top of all of that, these two legends are putting their belts where their mouths are. It’s the type of fight that comes around once or twice in a lifetime.”

Whether or not McLaren’s lofty expectations for Ortiz vs. Del Rio are met are to be determined.