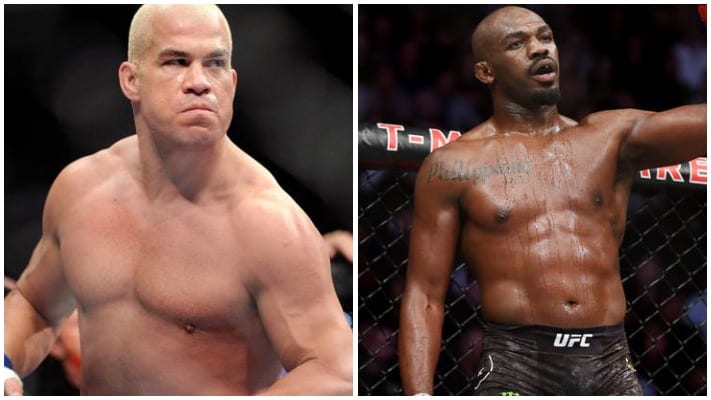 Tito Ortiz has been talking up his chances against Jon Jones. Speaking to TMZ the former light heavyweight champion said he believes he can beat current 205lb champion and pound-for-pound great Jon Jones. (H/T TMZ)

“I think I can beat Jon Jones,” Ortiz said. “I think I have a good chance – I really do think I’ve got a good chance. If people say, ‘Oh, Tito, (expletive), you’re over the hill,’ whatever. Come to my camp. Come train with me. Come wrestle with me. Come do jiu-jitsu with me. Watch my weight training. Watch my biking and stairs that I do. I push myself harder than I pushed myself through my whole career. I’m doing amazing. My mind is in the right place, my body is in the right place.”

Ortiz even went as far to tell the media his game plan should a fight ever materlise between him and Jones.

“Come on, why wouldn’t I? Pressure, pressure, pressure. You stay in that angle, the outside reach of him, you’ve got problems with it. You can’t just sit there and play his game.”

Whatever the outcome “The Huntington Beach Bad Boy” believes Jones cannot be considered the greatest of all time due to his several indiscretions inside and outside of the cage.

“He could be the best ever, but I mean, could have – not anymore,” Ortiz said. “He tarnished his career so many times, so much stuff that he did in and out of the cage it just – God, it bums me out because I love the guy, man. He was one of the best light heavyweights to ever grace the octagon.”

Has Tito Ortiz totally lost his mind or does he actually have a chance?