LowKickMMA.com
Home UFC News It’s Time For ‘Bigfoot’ Silva To Save Himself By Retiring 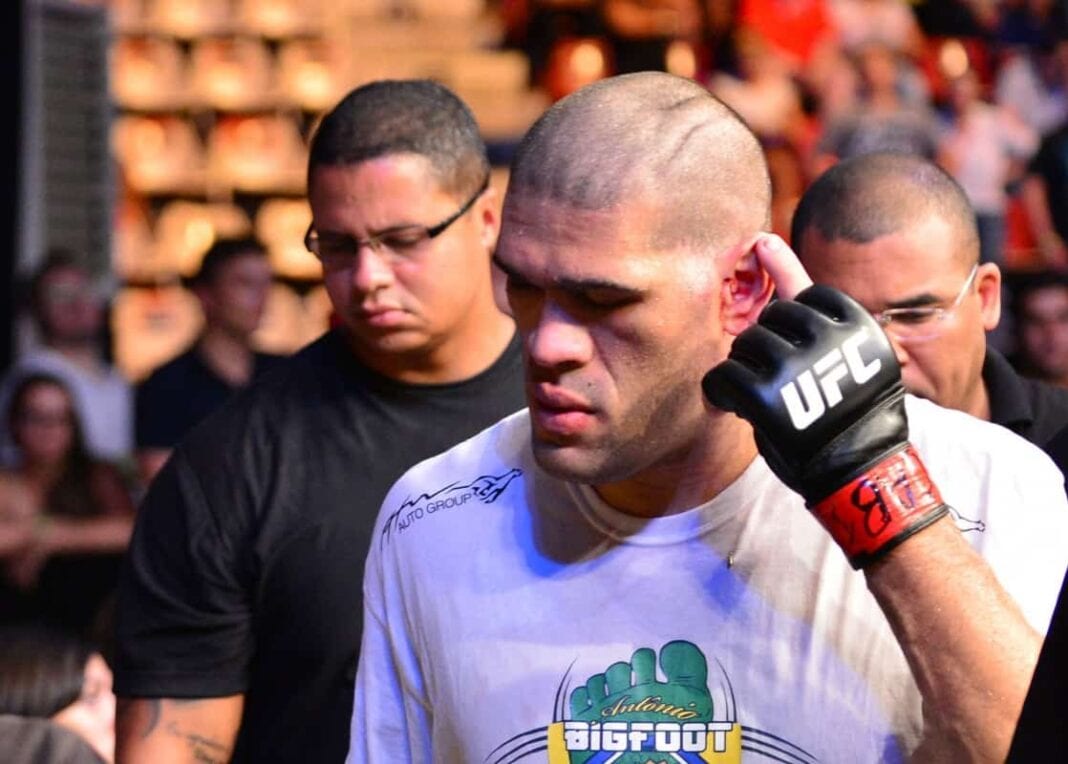 With earth-shaking knockouts from the most powerful men in MMA adding up, it’s becoming evident that ‘Bigfoot’ is putting both his health and safety on the line when he steps into the Octagon. His only fight in the last two years where he wasn’t knocked out was his classic draw with Mark Hunt at December 2013’s UFC Fight Night 33 from Brisbane, Australia – a bout that was changed to a no contest after ‘Bigfoot’ tested positive for elevated testosterone.

He returned from his nine-month suspension to take a high-risk bout with former titleholder Andrei Arlovski, who was ranked No. 14 to Silva’s No. 5 heading into their UFC Fight Night 51 main event last September.

But ‘Bigfoot’ was felled by yet another massive blow to his gigantic chin, a chin that has been crumbling quickly in the face of countless power punches. It’s been that way ever since the scourge of testosterone-replacement therapy (TRT) was removed from the UFC; certainly not a good sign for Silva.

That’s not to bash on ‘Bigfoot’ too much, because he was undoubtedly a high-level heavyweight who had won 9 out of 11 bouts heading into Strikeforce’s merge with the UFC. However, he has largely failed in the face of top-level competition, and his two highest profile UFC wins were somewhat fluky themselves.

His biggest victory, a highlight reel knockout of Alistair Overeem at UFC 156 in February 2013, came in the third round of a fight that ‘Bigfoot’ was most likely down two rounds to none and needed a finish. He got it and deserves credit for it, but it could have also spelled the beginning of his demise because he faced Cain Velasquez at UFC 160 and has not won a fight since.

His other huge win, a UFC on FOX 5 technical knockout over Travis Browne, was only because ‘Hapa’ badly hurt his hamstring while attempting an ill-advised leaping kick early on in the bout. While it was a great win, it most likely would have ended much differently had ‘Hapa’ not been injured.

But at the heart of the matter, ‘Bigfoot’ simply looks like he’s a far different fighter when he’s off of TRT – and his skills haven’t improved. He’ll still be around for a few more fights, as he can still put on exciting ones even if he’s just the target of another awe-inducing knockout or two.

Despite the fact that he fights in a heavyweight division starved for contenders, however, I think ‘Bigfoot’ should just hang up the four-ounce gloves. He’s never going to come close to sniffing the heavyweight title as long Velasquez, Junior dos Santos, and probably several others are around, so there’s no reason for him to continue taking punishment from elite heavyweights.

He made a good run and fought the best, but now his safety could be on the line. Do you think ‘Bigfoot’ should call it a career, or should he sign on for another fight?