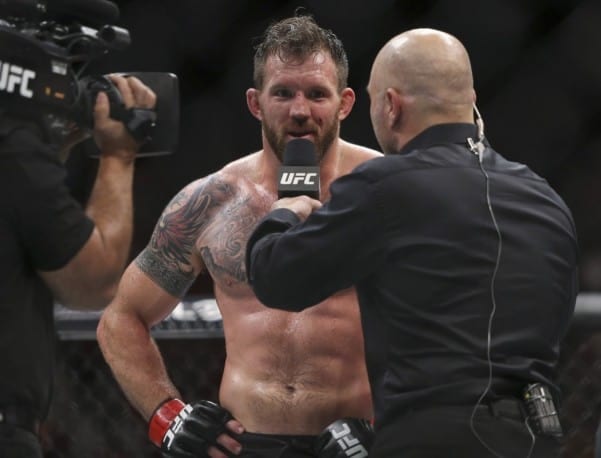 It seems as if No. 4-ranked light heavyweight contender Ryan Bader can never catch a break when it comes to title fights. After winning four-straight bouts, and engaging in a confrontation with champion Daniel Cormier last May, it seemed as if “Darth” was in line for a shot, but that was ultimately handed to Alexander Gustafsson, who Cormier beat via split decision last night (Sat., October 3, 2015) at UFC 192.

Bader also fought last night, taking on the returning No. 5-ranked former champion Rashad Evans in what was thought to be a title eliminator. Bader shocked many by beating Evans quite easily, but a title shot still may not be next for the former Arizona State wrestler.

With former champion Jon “Bones” Jones recently avoiding jail time after his felony arrest for hit-and-run charges last April, all signs point to a massive rematch between Cormier and Jones.

However, without further ado, let’s take a look at three potential fights for Ryan Bader to take next:

Despite Jones being the front runner for a title shot, we still have to see how things play out. The UFC has not yet reinstated “Bones”, and it’s still unclear when the former champion plans on returning to the Octagon.

That being said, depending on how the situation unfolds, Bader undoubtedly deserves a title shot. He has now won five-straight, and added a huge name to his resume by taking out the former champion in Evans. “Darth” showed vast improvements in his striking against “Suga”, and of course has a decorated wrestling background to go along with it.

Many have criticized Bader for his so-called “boring” style in the past, but he seems to have hit his stride, and could potentially pose an interesting threat to Cormier. Also, the two men clearly aren’t big fans of each other which would make things intriguing as well.

Bader, and Teixeira have actually fought before, back in 2013. “Darth” seemed to be having some success until he got a bit wild, and ultimately fell at the hands of the Brazilian slugger.

After beating Bader, Teixeira went on to drop two-straight to Jon Jones, and Phil Davis, but recently picked up a win over Ovince St. Preux. He’s now set to take on Patrick Cummins next month in Brazil, and if he comes out victorious, a rematch with Bader would make sense if “Darth” is passed over for a title shot once again.

Teixeira is currently ranked No. 3, and a bout with Bader would almost have to be a title eliminator.

Just like Teixeira, “Rumble” Johnson is trying to earn another title shot, and could provide another big name for Bader, once again only if he’s passed up for a title shot.

Johnson had his chance to claim gold when he met Cormier in May, but ultimately came up short. He has since taken out Jimi Manuwa last month, and is probably looking to meet a top contender in hopes of climbing back up the ladder.

Bader would fit the bill, and it would be an interesting matchup stylistically.

Who would you like to see “Darth” meet next, or should the UFC finally give him his well-deserved title shot?