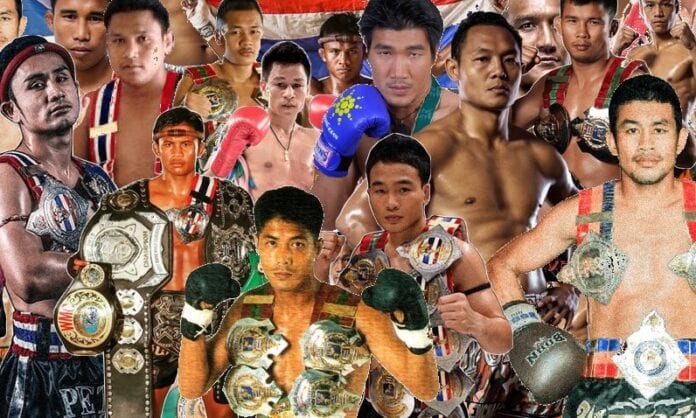 Muay Thai is more than just competition. It is the modern representation of century after century of warfare, spiritual importance, culture, and identity to the people of the country.

Thailand is simply a conveyor belt of fighting talent and has produced some of the greatest fighters the world has ever seen. Over the years, we have witnessed the blend of raw brutality and spectacular finesse – often exhibited by the same fighters – in the national stadiums regarded as spiritual homes of “The Art of the Eight Limbs”

From the tall and powerful Muay Khaos (knee fighters) to the deft Muay Femurs (technicians), these ten fighters are the greatest to ever do it (in no particular order).

Namsaknoi holds one of the most impressive records in Muay Thai history, with 280 wins in 300 fights. With such a definitive style and ability to work out his opponents, the 1996 and 1999 Muay Thai Fighter of the Year was incredibly popular in the sport in his era. There is certainly a case to say that Namsaknoi was the stand-out fighter of his time.

Another thing which stands out about the Evolve MMA trainer’s time inside the ropes was his eye-catching Wai Kru (traditional pre-fight dance). Many purists of the sport appreciated the Nak Muay’s style and grace, but he is arguably still one of the most underrated fighters in the history of the modern era. The self-confessed “scrawniest kid” of his fight camp would go on to be a true great of the sport.

Known as “The Ring Genius” in Muay Thai, Namkabuan was an exceptional fighter with a peerless ring IQ. His understanding of the basics – and ability to master them – made him a mechanical fighter who was incredibly difficult to break down. What made matters worse for his opponents was that he was also blessed with impressive power and strength.

As the younger brother of Namphon Nongkee Pahuyuth, Namkabuan would not have been blamed for accepting a life living in the shadows of his sibling. That was not to be the case, however, as the technician developed at a rapid pace, using his trademark sweeps and all-round weaponry to establish himself as the Lumpinee junior lightweight champion.

Perhaps the most famous Muay Thai fighter of all time, Saenchai is one of the greatest Muay Femur fighters to ever grace the sport. His understanding of distance, space, movement, and how to command a ring are arguably unparalleled in the history of the sport. Often spectacular, Saenchai is a hero to many young Nak Muays who try to emulate his special style and grace inside the ropes.

The multiple World Champion and Lumpinee icon defines what it is to be a true technician inside the ropes. While still competitive as we approach the third decade of the 21st century, Saenchai is more like the global ambassador to Thailand’s national sport. The all-time great is more likely to be found in exhibition bouts these days, displaying his tremendous understanding of what it is to be Muay Thai legend.

Pud Pad Noy had it all. Aside from a presence which would terrify most fighters, “Golden Leg” was also one of the greatest Muay Tae stylists to have ever lived. That “golden leg” was certainly one of the reasons for the Nak Muay’s success. To say that a kick from his famous left leg was as dangerous a scenario as they come in the sport would be an understatement of embarrassing proportions.

Stalking the ring like a Thai terminator, what made him stand out so much was that he also had an incredibly high fight IQ. Power and intelligence combined in Muay Thai is a dangerous cocktail. Pud Pad Noy will always be one of the most gifted fighters in history as a result. His numerous championships, titles, and accolades will certainly help to prove his case as one of the true greats.

Despite being ranked in first place in both the Lumpinee and Rajadamnern stadiums, Somrak Khamsing would never win either. It may appear strange that such a scenario could happen in sport. Unfortunately for Somrak, that is just what happened. The reason why is that he was simply too good to inspire betting activity, which saw promoters shun him for bouts. An incredibly unique position to find yourself in as a fighter, nonetheless.

Despite the setbacks, Somrak believed in himself enough to transition to boxing. The move was the right one, as he would pick up a gold medal at featherweight in the 1996 Olympic Games in Atlanta, USA. Instead of turning pro in boxing, Somrak would compete in Muay Thai and K-1, with some success. In terms of skill, however, he is one of the greatest talents ever produced in the “Art of the Eight Limbs.”

There are fewer fighters as well renowned for demonstrating how to be a Muay Tae stylist than Kaensak. The Muay Thai legend was both a Lumpinee and Rajadamnern champion who exhibited an incredible kicking game while fighting extremely smart. As such, he was rarely in the way for opponents to catch. His elusive defense and understanding of space and distance were truly impressive to watch.

While Kaensak demonstrated many of the particular skills which would generally be associated with a Muay Femur style, his kicking game surely put him in the bracket of a Muay Tae master. What made Kaensak so unique is that he could seamlessly switch between these styles, and had an incredible clinch game to boot. Quite simply, this special fighter is one of the best to ever do it.

Despite being arrested in 2008 for the alleged sale of methamphetamine, Thongchai is still regarded as one of the brightest stars in the sport’s history. With such ferocity and fire – and exceptional knockout power – the Muay Mat would have given any fighter in any era a run for their money. Regarded as one of the purest finishers in Muay Thai, Thongchai is still the only fighter to have ever knocked out Saenchai.

What made this fighter’s style so popular among spectators and gamblers was the all-action approach that went with it. Put simply, this fighter wasn’t afraid of taking a shot. Typically, a punch, kick, or elbow landed on Thongchai would result in at least double returned, so watching him in action was something to behold. Even with the controversies and troubles considered, he is an all-time great.

Apidej is regarded as one of the absolute greats of Muay Thai. In fact, he was named as the “Fighter of the Century” by King Bhumibol Adulyadej, making his case for the claim of the best ever. What made his style so feared was the power which punctuated his shots. In one bout, he managed to break both of Sompong Charoenmuang’s arms. That is no mean feat inside the ropes, it must be said.

While the devastating power possessed by one of Muay Thai’s golden fighters was certainly impressive, it would be foolish to discount the rest of his arsenal. Apidej had strong hands and a very cultured teep which made it exceptionally difficult to get close enough to attack him. Those who tried were usually outmaneuvered and given a healthy dose of reality to prevent them from being so foolish the next time around.

The man who was known in Thai as “Little Engine” could certainly fool many with that title. An absolute tank of a man, the Muay Khao master had a clinch and knee game which is still the blueprint for fighters looking to perfect this style. The only problem for Dieselnoi was finding an opponent. For a two year period in the early 1980’s, the all-time great could not find a man to fight, given his overwhelming greatness.

As such, the Thai turned to Japanese kickboxer Shogo Shimazo and Canada’s karate champion Peter Cunningham for competitive action. His powerful frame, sledgehammer shots, and dominating style were often too much for anyone to handle. As such, the all-time great – and fighter who many believe to be the best to ever do it – retired at the tender age of 25-years-old.

The chances are – that if you asked the majority of Muay Thai enthusiasts who the greatest of all time was – Samart Payakaroon would be crowned the king of the sport.  There is no fighter as beloved among fans than the “Muhammad Ali” and “Sugar Ray Robinson” of Muay Thai. Even to this day, decades after he retired, Samart is worshipped among kids who weren’t born when he was active.

Although he was not blessed with strength or athleticism in his youth, Samart developed a style which is known as the ultimate way to fight in Muay Thai. His intelligence, reflexes, ability to work out opponents, and incredible technique made him perhaps the most impressive Nak Muay in the “Golden Age” of Muay Thai. Samart won multiple Muay Thai titles and even a world title in boxing, proving his talents were far from limited.

The greatest of all time?