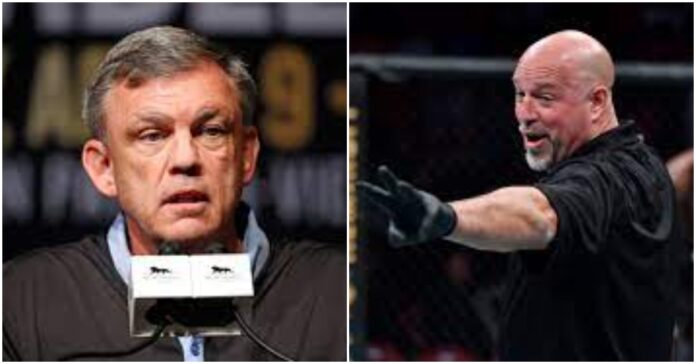 Teddy Atlas blasted the long time MMA ref Dan Miragliotta for not stepping in and stopping the Frank Mir vs Kubrat Pulev earlier.

Miragliotta is known as one of the best MMA refs in the game. He has been a professional referee for the UFC and other organizations since 2007. He also refereed the latest main event at UFC 268, headlined by Kamaru Usman and Colby Covington.

Triller Triad Combat held boxers vs MMA fighters in their inaugural event that was headlined by former UFC heavyweight champion Frank Mir and Kubrat Pulev. Pulev came out of the bout victorious via TKO, but Atlas was upset with how long it took referee Miragliotta to call it. Mir took a few big shots, and if it wasn’t for Pulev’s restraint it could have been much worse than it was.

Teddy Atlas was on his podcast ‘The Fight with Teddy Atlas‘ when he addressed how long it took Dan Miragliotta to step in and call the fight.

“We don’t exaggerate these things, we don’t look to do that but he [Frank Mir] could have really got hurt bad. I mean, if it wasn’t for Pulev, not the ref, that ref should never ref a fight again. Not because of the ref, not because of anything other than, really, where you wouldn’t expect it. Pulev had to be his own ref, he had to be his own conscience, he had to use control, discipline, character, humanity.” (Transcribed by Sportskeeda)

Atlas has a point since it was a late stoppage, but Miragliotta is one of the better refs in MMA. Mir was visibly out on his feet and could barely keep his balance. Pulev made quick work of him as he finished him in the first round easily.

Do you think Teddy Atlas has a point?