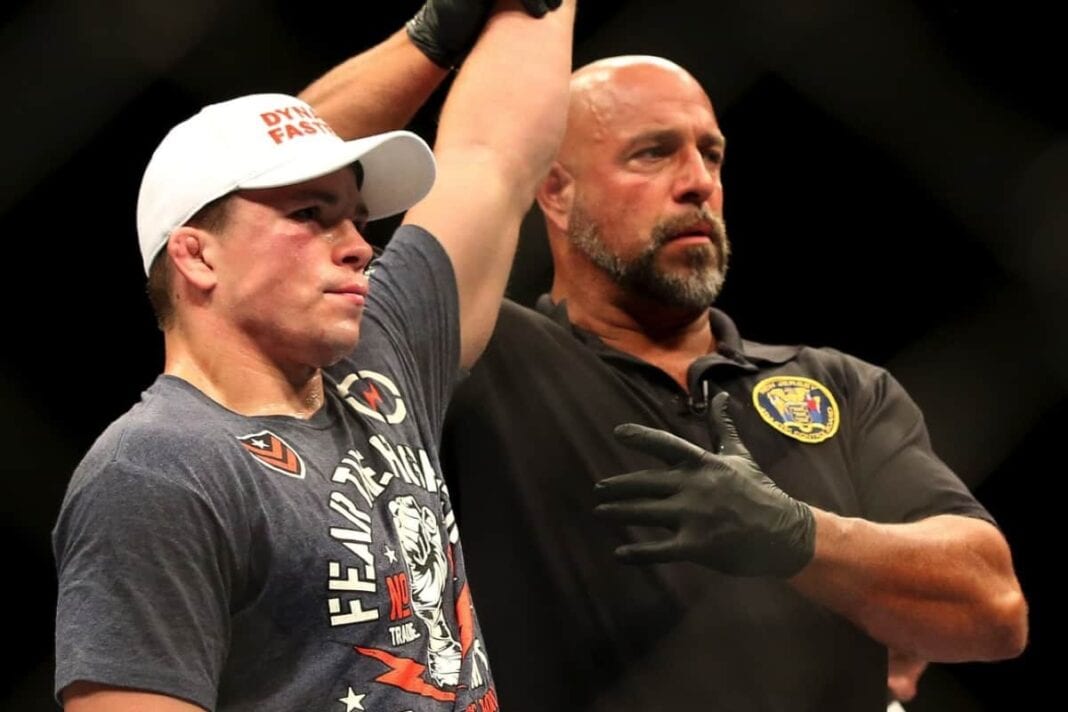 Saffiedine won a decision over Jake Ellenberger in his most recent fight at UFC on FOX 8 in January, his first bout since an October 2014 loss to former title challenger Rory MacDonald due to a bout with injuries. Longtime veteran Story had also been on the bench for an extended period of time, as he was last seen winning a split decision over Gunnar Nelson at October 2014’s UFC Fight Night 53 from Stockholm, Sweden.

Saffiedine was also nearly pulled from this bout after suffering a cut on his knee in training, but was later cleared to compete. Both fighters needed a win to keep rising in the dangerous UFC welterweight waters.

Story came out with a hard low kick early, following up with another in a first minute that was low on action. Story then landed a few hooks in close, and Saffiedine landed a kick to the body and a punch. Story went for a takedown and clinched on the fence, but Saffiedine broke to land a nice head kick. Story pushed forward with a combo and landed two more big hooks before attempting another unsuccessful takedown. Saffiedine’s cut was bleeding rather heavily as Story clinched to rip his body to wind down the first.

Story came out with his low kick and follow-up punches in the second, with Saffiedine landing a grazing head kick. A checked low kick saw Story fall to the mat but couldn’t be held down. Story landed a big hook as Saffiedine lunged for a takedown, and “The Horror” controlled “Sponge” in the clinch once again. He worked the body but ate a knee to the body. It didn’t effect Story much, however, as he kept grinding away with ripping body punches and a grueling clinch. A separation saw Saffiedine land two more glancing high kicks, and the round wound down in the clinch.

In the final round, Story came out aggressive as usual, ripping Saffiedine’s midsection with hard punches again. He continued his grinding, grueling clinch work to stop Saffiedine’s vaunted kickboxing game with takedown attempts and knees, landing a heavy hook on a break. “Sponge” did land a hard right and another head kick, yet Story walked through it to strike more. Big punches landed from both fighters as Story lunged forward to clinch again as the bell rang.

Story took home a strong unanimous decision to win his first UFC match in a year-and-a-half.