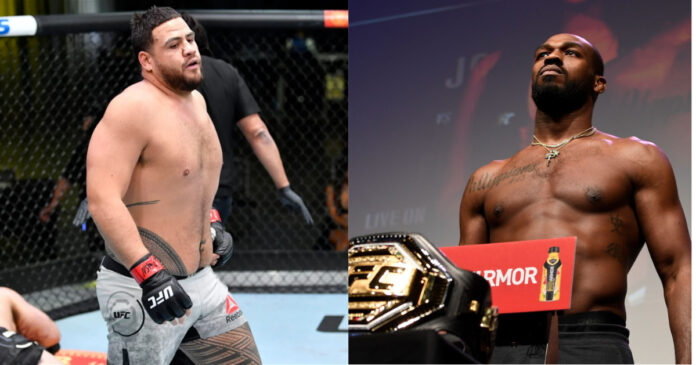 UFC heavyweight Tai Tuivasa shares some Instagram DMs with Jon Jones and claims that Jones has blocked him.

Tai Tuivasa’s most recent win over former title challenger, Derrick Lewis, has now found him on a five-fight win streak and ranked No.3. The Australian is on the precipice of potentially challenging for the heavyweight title and could find himself across the cage from an array of big names.

One of which could be Jon Jones, the former light-heavyweight champion who has been preparing himself for the move up heavyweight over the past two years in hopes of achieving double champ status.

It seems as if Jones will be facing former champion, Stipe Miocic for the vacant title while current champion Francis Ngannou recovers from a knee injury.

Still, that wouldn’t stop Tuivasa from goading and engaging in some sort of confrontation over social media with Jones. ‘Bam Bam’ would post a screenshot to Instagram of a conversation between him and ‘Bones’.

“You sound off ya head,” Tai Tuivasa began. “I’d out party ya too I reckon. Just sayin but yeah Mary had a lil lamb too and I smoked her (smoke and laughing emojis) whatever whatever bra when you come back I’ll still be around you want a warm up lamb roast I’ll be waiting.”

“Good luck with your beer company,” Jones would reply.

Tuivasa would caption the post “B WEEEEZZZZZZZYYYYY #bones you know I love you man add me back uce you know he want dat @drinkwest.”

Would you like to see Tai Tuivasa vs. Jon Jones?