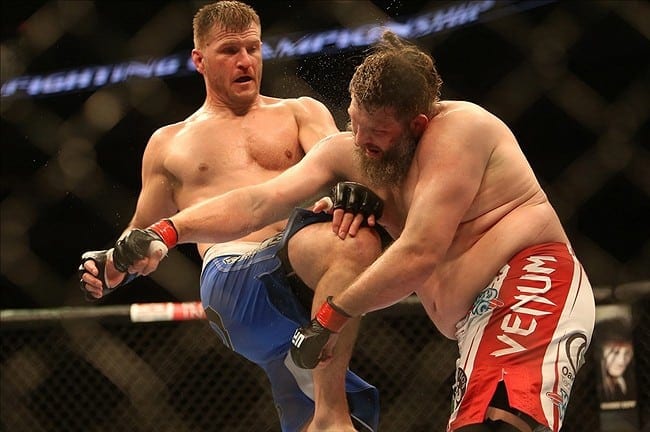 Everyone knows the best way to a title shot in the UFC is through Roy Nelson’s stomach….

UFC heavyweight Stipe Miocic faces off with Junior Dos Santos at UFC on FOX 13 in December, and joins the forefront of a very interesting debate.  With the division having only seven from the top 15 in winning form, and three out of the top ten already holding at least one loss to the current champion, the Croatian wrestler has a big opportunity against “Cigano”.

Perhaps the relative stalemate at heavyweight is an advantage for Miocic, one that could easily yield a title shot by 2015 for the former NCAA division I and Nashville University baseball star. Speaking to MMAFighting.com, the Ohio native says he believes a win in December is the key to his title shot:

“I mean, wouldn’t you think so? I’d think so,” Miocic said. “Junior is ranked second. That would move me up to be right behind Werdum, so I think whatever happens after that fight, I should get a shot. He’s fought for the title plenty of times. He’s been champion. He’s been [sidelined] for a while, but definitely once I beat him, I think I should get that chance.”

Miocic has had a relatively solid UFC career thus far, racking up an overall record of 12-1, with six wins and one loss coming under the Zuffa banner. His most impressive showings have certainly been against tough competition (Maldonado, Nelson and Gonzaga) but Dos Santos is a different breed in comparison. For the Croatian, putting the pressure on JDS is going to be the gameplan at UFC on FOX 13:

“The pressure, putting pressure on him, not letting him get off any punches.He’s a great guy, he’s a good fighter. He moves a lot, there’s no question the big boy moves fast. He hits hard, just like any fighter in the heavyweight division. I respect him a lot. He’s a former champ, the guy knows what he’s doing in there. He’s a veteran. But I’ll be ready come December 13th.”

Styles make fights, and I imagine this pairing should be quite a burner. As “Cigano” returns from his year-long layoff after his second loss to Velasquez, is he in no mans land while seeking a fourth fight with the Mexican heavyweight boss? That being said, it could well be the champion’s UFC 180 opponent Fabricio Werdum that Miocic faces….

Either way, do you think Stipe Miocic deserves a title shot if he beats Junior Dos Santos?