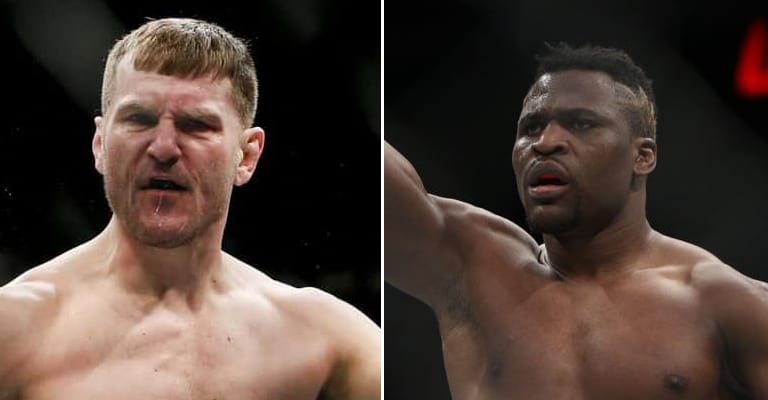 The most anticipated heavyweight bout in MMA right now – and perhaps ever – is set for January’s UFC 220.

News arrived from MMA Junkie and was subsequently confirmed by MMA Fighting’s Ariel Helwani tonight (Dec. 6, 2017) that champion Stipe Miocic will take on surging No. 1 contender Francis Ngannou in a potentially explosive match-up scheduled for the main event of the pay-per-view event from Boston, Massachusetts.

Ngannou (11-1) finalized his shot at the title by knocking out former title contender Alistair Overeem with a vicious first-round knockout at last weekend’s UFC 218 from Detroit. The win gave him an undefeated 6-0 record in the UFC, with all of his victories coming by way of stoppage, including his last four in the first round.

He’ll face by far the biggest test of his MMA career when he meets similarly surging champion Miocic, who was last seen stopping former champion Junior dos Santos at May’s UFC 211 from Dallas, Texas. A contract dispute kept him out of action for the rest of the year.

Miocic (17-2) has been on fire like few UFC heavyweight champions ever have been, winning his last five bouts including two title defenses over Overeem and dos Santos, which put him in a tie for the record for the division’s most consecutive defenses. He’s only lost to dos Santos by split decision and Stefan Struve by TKO in his decorated fight career.

The bout will join the previously scheduled light heavyweight title bout between Daniel Cormier and rising contender Volkan Oezdemir, which was put in possible danger when news recently broke that Oezdemir ha been arrested for felony battery in his adopted home of Florida. The bout will go forward as planned; however, it has reportedly been demoted to the co-main event now.

The pay-per-view event will mark only the fourth time in UFC history that the heavyweight and light heavyweight titles will be defended on the same card.