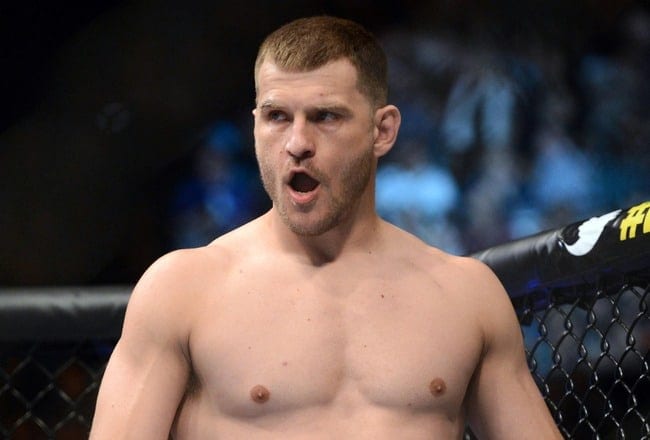 After compiling three-straight impressive wins throughout 2013 and 2014, Stipe Miocic had a golden opportunity in front of him when he met former UFC heavyweight champion Junior Dos Santos last December in the main event of UFC on FOX 13. With the chance to solidify himself as a true title threat, Miocic battled back and forth with JDS in a bloody five-found war, but ultimately came up short.

Despite the upsetting loss, the Croatian claims that he actually gained more than he lost. The five-round experience boosted his confidence, and Miocic also proved that he can hang with the heavyweight elite:

“I definitely showed that I do belong in the division at the top tier,” Miocic told MMAjunkie Radio. “I proved that I can hang with anyone. My confidence went up a lot more.

“That was the first time I actually went five full rounds. I definitely know how that feels like now and know what to expect next time. There were a lot of things to work on, and I’m going to and have been. It’s a part of the game. Everyone’s evolving so you’ve got to keep evolving.”

Miocic definitely proved his worth amongst the heavyweight division, and he will get a chance to bounce back in Australia in another main event slot, as he meets heavyweight slugger Mark Hunt on May 9, 2015.

Hunt is currently ranked No. 5 in the division, and may even be the best pure striker amongst the UFC’s big boys. The former K-1 champion was last seen challenging for the interim heavyweight championship at UFC 180 against Fabricio Werdum, and even had Werdum hurt early on.

This will be a huge bout for Miocic, one in which a win would put him right back in the title race. However, he is not overlooking the heavy-handed Hunt. Miocic is well aware of Hunt’s power and how dangerous he is, but also expressed his excitement for the fight:

“(Hunt is) one of the top guys of the guys that hit hard,” Miocic said. “He can catch you with anything, and he’s got a good chin. I’m super excited for this fight and wish it was here already.”

Can Miocic get passed Hunt in Australia?