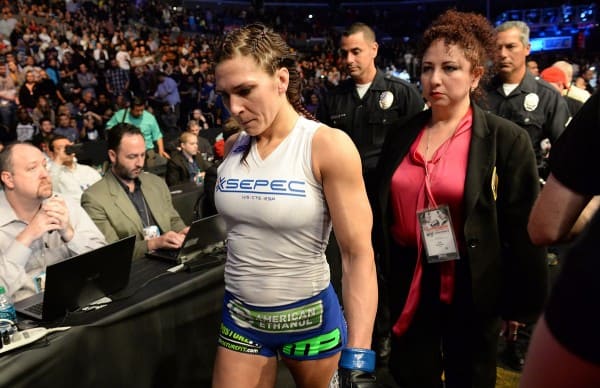 No. 1-ranked women’s bantamweight fighter “Alpha” Cat Zingano has been on the shelf since she suffered a devastating 16-second loss at the hands of ultra-dominant champion “Rowdy” Ronda Rousey last February.

Apparently still treating some injuries, Zingano is eyeing a return to action sometime next Fall according to a report from tonight’s (May 27, 2015) edition of UFC Tonight. In the very shallow 135-pound division Zingano was looked at as one of the only females capable of challenging Rousey. Although she was finished shockingly and insanely quickly, Zingano remains one of the top fighters in the division, and should still receive a solid bout upon her return.

Apparently the UFC even has an opponent in mind for “Alpha”, as the promotion was supposedly interested in booking two former title challengers against each other in the form of Zingano and former Olympian, No. 4-ranked Sara McMann. However, the UFC was eyeing a July 15, 2015 date for this fight, a date McMann is heavily interested in competing on, and Zingano just won’t be healthy in time.

There may be another opponent on the horizon for “Alpha” though, and a very interesting one in that as UFC Tonight was informed that The Ultimate Fighter (TUF) 18 winner Julianna Pena is interested in a bout with Zingano. “The Venezuelan Vixen” was poised to be an immediate contender coming off of the reality show in 2013, but a brutal knee injury put her out until earlier this year. She returned at UFC Fight Night 63 last month, making a statement by scoring an impressive first-round TKO victory over Milana Dudieva.

Despite being ranked at No. 12, Pena could potentially score a fight with Zingano due to the scarcity of contenders in the division. This would be a chance for both ladies to prove themselves as true contenders.

Who would you like to see Zingano meet when she returns sometime later this year?