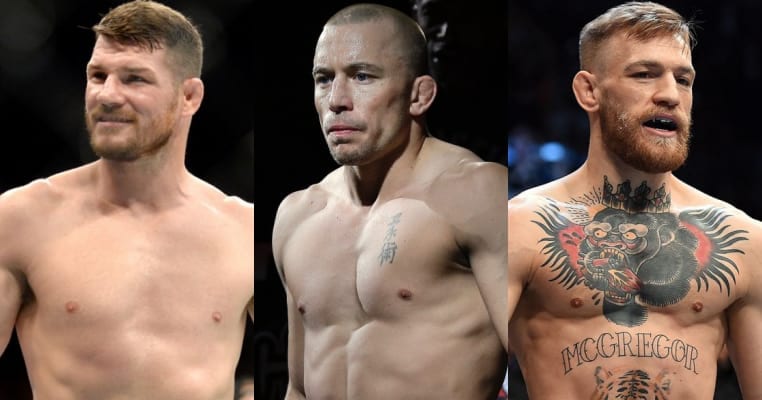 Although he hasn’t fought since he vacated his title in 2013 following a highly controversial split decision win over Johny Hendricks, former longtime UFC welterweight champion Georges St. Pierre announced late last week that he had inked a new deal with the promotion and would finally be returning to the Octagon he once ruled.

His return fight has not yet been set, but there are no shortage of opponents waiting for St. Pierre, as he still remains one of the biggest names in the sport.

He was in talks to fight middleweight champion Michael Bisping late last year, which is still an option, as is a potential superfight with lightweight champion Conor McGregor. Both of these options interest his coach, Firas Zahabi, who recently offered his opinion on the sure-to-be-hot topic:

“My ideal scenario, I don’t know if it’s still up for grabs, but I was really happy when there was a buzzing of Bisping or McGregor,” Zahabi told Ariel Helwani on Monday’s edition of The MMA Hour. “I thought those two would be two epic fights. One, he would go a little lower [in weight]; one, he would go a little higher. But those are really, really intriguing fights. Of course, Tyron Woodley, he’s the [welterweight] champion and et cetera, but he has his fight with ‘Wonderboy’ [Thompson]. And if ‘Wonderboy’ wins, then they’ll have a trilogy. And of course we don’t want to fight with ‘Wonderboy,’ we go way back together.

“So I think the welterweight title is not really something he (St-Pierre) is thinking about right now because of the current landscape, but there is always the 185-pound belt. And of course, McGregor is such a mega-star that if you put those two on a main event, I don’t think that anybody in the world wouldn’t watch that. I think that even non-MMA fans would watch that. But again, I don’t do the match-ups, I don’t do the managing, I’m just talking as a trainer.”

Do either of these options interest you, or would you rather St. Pierre face a different opponent in his long-awaited comeback fight?