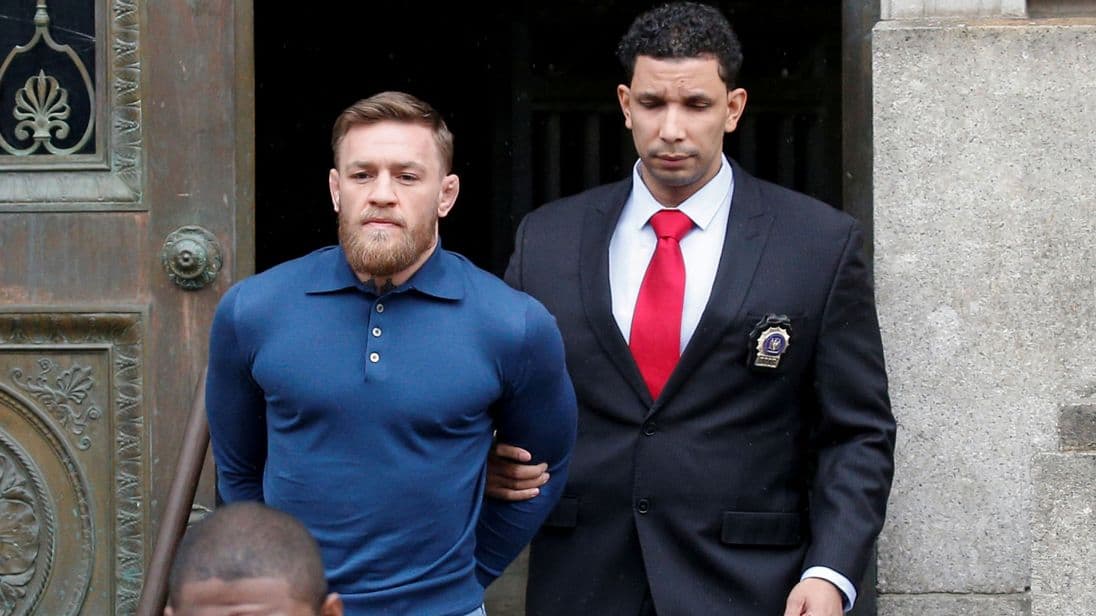 In the weeks after former UFC lightweight and featherweight champion Conor McGregor was arrested on assault charges in Brooklyn, New York, for throwing a metal dolly through a bus containing current champ Khabib Nurmagomedov, the MMA world has been awaiting just what will happen to “The Notorious.””

UFC President Dana White recently stated that the UFC would have to wait to see what the court did to him first, and it’s speculated that the world’s MMA leader will do little if anything to do their biggest star in hopes of booking him for a lucrative megafight with the undefeated Russian champion sometime later this year or in early 2019.

‘The Notorious’ certainly faces some harrowing charges at first glance, yet the general consensus from those with experience in the field is that he’s unlikely to serve any jail time as the charges are his first offense on American soil. One such subscriber to that theory is criminal and civil lawyer Dmitry Shakhnevich, who has worked in Brooklyn and recently told Bloody Elbow’s Victor Rodriguez that McGregor probably won’t serve any jail time at all:

“So he’s not looking at, in Brooklyn, generally, you wouldn’t get jail time for this, especially if it’s your first offense, which I understand this is. So, what’ll likely happen is he’ll probably get it reduced to either a misdemeanor or maybe even a non-criminal disposition, though that’s unlikely.

“I don’t think he’ll serve any jail time at all. Again, that’s highly unlikely. I think he’ll probably be sentenced to some form of community service or something of that nature, and the case will go away.”

It sounds like some incredibly lax treatment for a shocking assault that left two fighters injured and unable to compete at April 7’s UFC 223, yet McGregor obviously has the money and influence to hire the right lawyers to get him out of trouble.

He could need them for a different aspect of the case according to Shakhnevich, who revealed the lesser-discussed aspect of a conviction impacting his immigration status:

“The issue is immigration. If by way of a guilty plea he’s convicted of a misdemeanor, that can have immigration consequences. I don’t think it will – I think his lawyers will craft something creative to work around that. But that’s really what you have to look out for here.”

Shakhnevich then detailed how a conviction could affect McGregor’s status to travel to and from America, noting that his offenses would likely plead down to the lowest level and ultimately not affect his immigration status:

“Well, again – the way that criminal convictions impact immigration status, there are no black and white rules. Generally speaking, if you’re convicted of a misdemeanor. right? Which is a low-level offense, the lowest level offense in in New York in terms of crime.

“Typically that one misdemeanor – again, typically – will fall under the petty offense exception which basically allows the person to travel in and out. So I don’t think unless it’s some specific type of misdemeanor, I don’t think that’ll have an impact on his immigration status.

“But again, it’s something his lawyers have to look out for. They should probably engage immigration counsel, because they’re criminal lawyers.”

As the MMA world awaits his long-anticipated return, McGregor will have to clear up his legal hurdles first, but from the sound of the situation it seems like the most costly punishment he’ll receive will be in the form of the hit his pocketbook takes when the victims of his attack who were harmed sue him in civil court.

As far as him spending any time in jail, well, it seems that ‘The Notorious’ will be a free man for the foreseeable future.