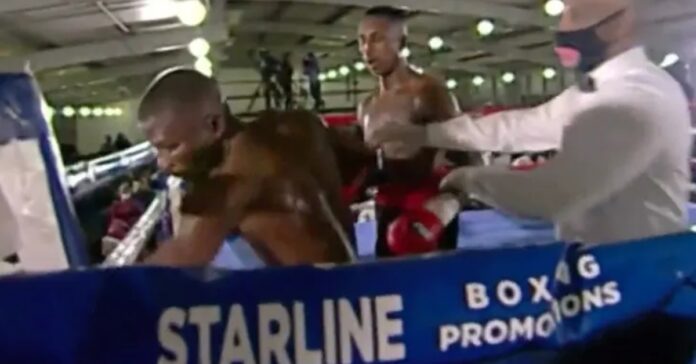 South African professional boxer, Simiso Buthelezi has died in hospital in his native South Africa, after he suffered a brain bleed during a championship bout against Siphesihle Mntungwa in Durban over the course of last week.

Simiso Buthelezi, 24, who competed against Mntungwa for the WBF African lightweight championship, began punching at air in an opposite corner in disturbing footage, after a halt in the action.

Backing Mntungwa to the ropes, and eventually, through the middle rope, Simiso Buthelezi was countered with a shot as he advanced toward his opponent in the final round of their 10 frame fight.

With the referee halting the action in order to allow Mntungwa back into the ring, Simiso Buthelezi began to turn away from Mntungwa and face a corner of the ring, beginning to throw a series of strikes at the air before the referee called the fight off.

As per an initial report from ESPN, Buthelezi, who had lost the bout due to a 10th round TKO as a result, was placed in an induced coma.

Boxing South Africa would then release an official statement in tandem with Buthelezi’s family, confirming that he had died in hospital on Tuesday evening after suffering a brain bleed.

“It is with great sadness for Boxing South Africa and the Buthelezi family to announce the passing away for Mr. Simiso Buthelezi who passed away last night the 7th June 2022 at hospital in Durdan.”

“On the 5th June 2022 Mr. Buthelezi participated in a Boxing Tournament hosted by Starline Boxing Promotions in Greyville, Durban.”

“Towards the end of the bout, Mr. Buthelezi collapsed and was taken to a hospital and it was discovered at the hospital that he suffered a brain injury which resulted in internal bleeding. At the hospital, Mr. Buthelezi was given the best care possible but he, however, succumbed to the injury last night as aforesaid.”

“The Buthelezi family and Boxing South Africa acknowledge warm words of condolences of the Minister of Sport, Arts and Culture.”

Buthelezi’s trainer, Bheki Mngomezulu spoke with News24 following the 24-year-old’s passing, explained how nothing “untoward” had occurred during training, and how he could not explain the circumstances of Buthelezi’s tragic passing.
“There wasn’t anything untoward in the fight and in training,” Mngomezulu said. “He was leading the fight on points before the unfortunate incident occurred. I really can’t explain what happened to be honest.”

“It was bewildering, but in his training and in the build-up to the fight, there was nothing untoward with regards to his condition. He was in good nick before the fight.”