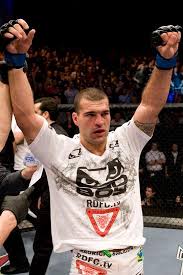 As it turns out, “Marvelous City” is so dangerous that it doesn’t even help if you’re the former UFC light-heavyweight champion of the world.

In an interview with PTV, Mauricio “Shogun” Rua’s manager, Eduardo Alonso, stated that his fighter (Rua) was run off  a Rio expressway a few days ago by four rifle wielding bandits, and subsequently carjacked at gunpoint.

Alonso commented that Rua had dropped himself (Alonso) and UFC welterweight Demian Maia off at their hotel after a sponsorship function, and while driving home in a friend’s (borrowed) car Rua was struck by a vehicle and forced to a stop. To add insult to injury, one of Rua’s robbers actually recognized him during the commission of the crime.

As Alonso tells the story:

“We were in Rio de Janeiro with Demian (Maia) representing a sponsor, and went to dinner with Shogun; well he was there taking pictures for another sponsor. At the end of the night, he (Rua) left us at our hotel in Barra da Tijuca, and went to Niteroi, where he was staying. this path, driving a friend’s car on the “Red Line” – an express lane that runs between the airport and the South Side of Rio – was struck by a car, and out got four armed individuals with rifles and they stole the car from Rua, stole the shirt Shogun (was wearing), stole (his) money, (and one even) said, ‘ I know who you are, you’re a fighter; don’t try anything.’ (Shogun said) In what way will I try? It was an unfortunate situation. “

Truly, it was an “unfortunate situation.” However, it’s also fortunate that Rua was not shot and killed, or for that matter kidnapped and held for ransom. As one of the perpetrators knew who Rua was, they might easily have gotten into their heads that the Brazilian MMA star was worth more than the car or the cash, particularly if they thought about sending the ransom note to the UFC and not Rua’s family.

Happily, none of it came to pass and all that happened was that “Shogun” ended up with a late night walk to a police station. Sadly, however, it demonstrates that even a great fighter with a tremendous skill set can be thwarted by a thug with a gun.