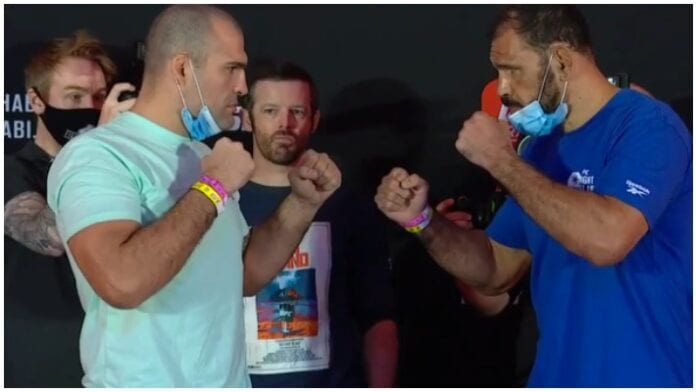 In the co-main event, Mauricio ‘Shogun’ Rua faces off against Antonio Rogerio Nogueira for the third time. The former UFC light-heavyweight champion holds two wins over ‘Lil Nog’. Will he get another? Let’s find out…

Round 1: Mauricio ‘Shogun’ Rua slowly presses the action at the start of round one. Antonio Rogerio Nogueira is backing up and circling around the cage. ‘Shogun’ slaps in a couple of low leg kicks. Rua rushes in. He’s unable to land anything but put his opponent up against the fence. Rua is landing knees to the legs while clinched up but ‘Lil Nog’ is working well with body shots. They break away from the fence and Nogueira lands a nice straight left. He gets a bit over confident and eats a couple of punches as he bulldozes forward. Nogueira is now the man leading the dance. He lands a big punch which clearly hurts ‘Shogun’ Carnage ensues! Both men are winging in punches. ‘Shogun’ dives for the takedown and secures it. He ends the rounds on top.

Round 2: ‘Shogun’ uses some feints to close the distance and press the fight up against the fence. ‘Lil Nog’ quickly separates and returns to the middle of the octagon. Nogueira is looking good. He’s got his left hand cocked and ready to go. He’s repeatedly firing it down the middle. ‘Shogun’ begins to fire back and a war breaks out once again. Both men land big and both men seem to have hurt the other. ‘Lil Nog’ seems to stumble into a takedown and then enjoys some time in top position before the fight returns to the feet. Rua shoots for a takedown of his own but is shrugged. He goes back to his boxing and lands a beautiful counter right hand. ‘Lil Nog’ is following his opponent around the cage. He’s throwing big and trying to score a knockout with every punch. He continues to chase Rua but is unable to get off anything significant before the round ends.

Round 3: Powerful inside low kick from ‘Shogun’ to open round three. He rushes in and eats a one-two for his efforts. He again comes in a little too clumsy and eats a big shot – a little wobble from the former champ. ‘Lil Nog’ is having success with his straight left hand and his corner are cheering loudly every time it lands. ‘Shogun’ lands a jumping kick to the body and a straight right hand simultaneously. Rua lands a few more big shots. He’s starting to build momentum and then shoots for the takedown – he gets it! Rua is in half guard landing short shots. He postures up and begins landing heavier strikes. They transition into a awkward side control position were Rua continues to try and land shots as the buzzer sounds to end the fight and bring and end to this epic rivalry.