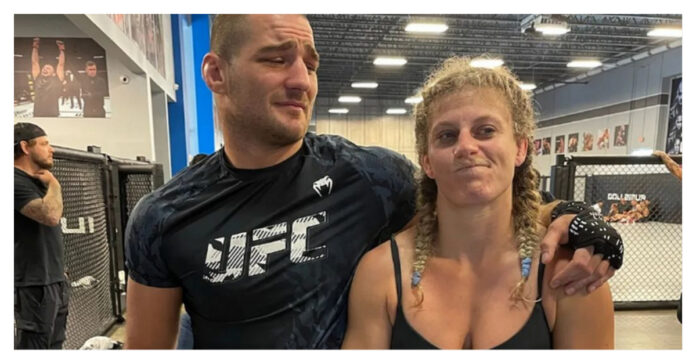 Sean Strickland seems to have a newfound respect for Kayla Harrison.

UFC Middleweight Sean Strickland is not known to be shy about his opinions. The fourth-ranked contender has come under fire numerous times for his outrageous takes. He’s made more headlines for bashing other fighters than for fighting in the UFC. Strickland took aim at the Professional Fighter’s League (PFL) last month for lacking quality talent as he targeted their biggest star, Kayla Harrison.

Over a month ago, Kayla Harrison took on Marina Mokhnatkina at PFL 3. The undefeated two-time champion did not appear to be in the best of shapes after racking up a dominant 12-fight win streak. Harrison would later express her disappointment at the showing last month. While she didn’t finish her opponent, she was able to outpoint Mokhnatkina for a win by a unanimous decision.

Strickland did not wait long to bash Harrison for her underwhelming performance on Twitter.

“Watching @KaylaH struggle with this low level girl just reminds me why shes not in the UFC. Stay in the PFL take your easy Ws in the scrub league…”

In a follow-up tweet, Strickland doubled down on his comments with an apology to the PFL while maintaining his stance on Harrison.

“I miss spoke about the PFL… I think Kayla is a glorified can crusher and the women’s league in the PFL needs some work… but there is some warriors in all other weight classes. The pfl needs to work harder in their female fighter roster.“

Harrison has never publicly responded to Strickland’s comments choosing to remain focused on her training. In an unlikely turn of events, the pair came across each other face-to-face at American Top Team (ATT) in Florida.

Strickland issued an apology to Harrison after the encounter and shared a photo together with her on his Instagram.

“So I finally met @judokayla in person and I thought “this is all an act, no way one girl could be this obnoxious, aggressive and arrogant” 100 percent who she is lmao!! That being said Kayla sorry I was an asshole to you on Twitter and id almost call us friends. Enjoy your millions, you’ve made more than me in 3 years than I’ve made my entire career!! BYE @americantopteam“

Harrison seems to have accepted the apology as she commented on the post.

Sean Strickland is scheduled to return to action against Alex Pereira this July 2 at UFC 276.