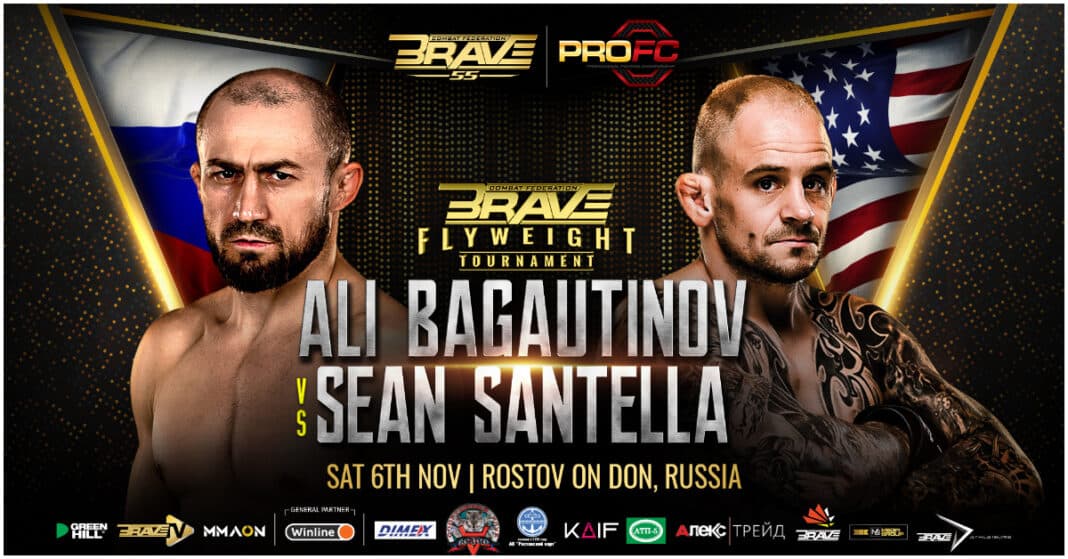 Two weeks ago, Sean “Shorty Rock” Santella was joking about how if it weren’t for bad luck, he would have no luck at all. However, he may have to rethink that statement after a whirlwind 24 hours saw him go from fighting on the undercard of BRAVE CF 55 to competing in the main event against Russian flyweight Ali “Puncher King” Bagautinov.

The pair will clash this Sat. November 6 in Rostov-on-Don, Russia. The bout will double as the main event and the second semi-final of the BRAVE CF flyweight tournament. The winner of Saturday’s clash will meet Russia’s Velimurad Alkhasov in the final for the right to be crowned the inaugural BRAVE CF Flyweight Champion.

“The last 24 hours have been crazy. It’s gonna be an honor to go to battle against one of the greatest flyweights in history,” Santella says.

“I get to fight somebody that I have always looked forward to fighting. I wasn’t sure if I would ever get the opportunity as I always considered him one of the flyweight kingpins next to Demetrius Johnson, so it’s another bucket list thing I can do.

Bagautinov was set to face Jose Torres, who had based himself in Russia in preparation for the bout. Unfortunately, issues with his weight cut meant that Torres was forced to withdraw from the clash, but in 37-year-old Santella, BRAVE CF had the perfect last-minute replacement.

Initially, in the flyweight tournament, Santella fought Torres in the quarter-final, with the bout ending in a draw. The pair were set to rematch at BRAVE CF 49 until an injury saw Santella pull out of the contest and the tournament.

Torres went on to defeat Ireland’s Blaine O’Driscoll to book his semi-final slot against Bagautinov, but now it will be Santella who will lock horns with one of the greats of the flyweight division.

The New Jersey native even feels that the last-minute change of plans will benefit him.

“I’ve said it before, and I will say it again, I don’t think anyone in the world has my style, and it’s impossible to prepare for, especially on 48 hours. I am super excited. I think it’s going to be a great fight,” Santella explains.

Santealla’s only loss at BRAVE CF was against Alkhasov, and even though he does not need any extra motivation ahead of Saturday’s bout, he would relish the chance of going up against Alkhasov one more time.

“Saturday night, my hand will be raised, and I’m going to move on to the finals of the Flyweight tournament to avenge my only loss at BRAVE CF.”

What do you think of this new main event fight?

Exclusive: Sean Santella Is Ready For BRAVE CF’s Entire Flyweight Roster ‘Put Me In There With Whoever’