LowKickMMA.com
Home UFC News Sean O’Malley Hopes To Fight For The Title With A Win Over... 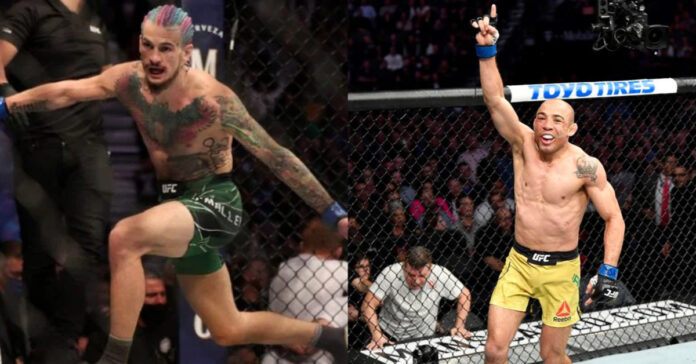 Sean O’Malley would like a title shot if he beats Petr Yan, but wouldn’t mind waiting his turn so Jose Aldo could get a shot before him.

O’Malley has a matchup with Yan at UFC 280 in Abu Dhabi, and it is by far the biggest challenge of his career. O’Malley has fought some solid competition, but nothing like Yan. Yan is the former UFC Bantamweight champion, but lost the belt by disqualification to Aljamain Sterling the first time they met. The second time they fought, Sterling was able to inch out a decision win that could have gone either way. Sterling’s wrestling was on another level that night, as he was able to control Yan’s back in a body triangle for almost two full rounds.

Aldo on the other hand is on an impressive run in the division as well. If he beats Merab Dvalishvili, a title shot may be in the near future for Aldo. Aldo is on a three fight win streak with wins over Rob Font, Marlon ‘Chito’ Vera, and Pedro Munhoz. Aldo hd recently said that retirement may be around the corner for him, so he is going hard to solidify a title shot.

Sean O’Malley is ok with taking the backseat to let Aldo fight for the belt, considering how big of a legend he is

“Obviously, I haven’t gotten to prove [I belong at the top]. That Pedro [Munhoz] fight didn’t really end the way I wanted it to. But I think I proved I can hang with the top-10 guys. Jumping up to the No. 1 guy, this is a huge test and I believe I will rise to the occasion… One hundred percent [I’ll deserve the title shot]. I think he [Aldo] said he wants to beat Merab and then fight for the title. I wouldn’t mind beating up Petr and then letting Jose fight for the title and then fighting the winner of those two. Jose’s a legend and he deserves to fight for that belt.” ” (h/t MMAFighting)

O’Malley is a special talent, but he hasn’t beaten anyone inside the top 10. His fight against Pedro Munhoz, wasn’t the most spectacular outing he has had, and it surely didn’t end the way he wanted it too. Getting through Yan is no short task, so only time will tell if O’Malley will even get a chance to fight for the belt.

Who do you think will fight for the championship next?