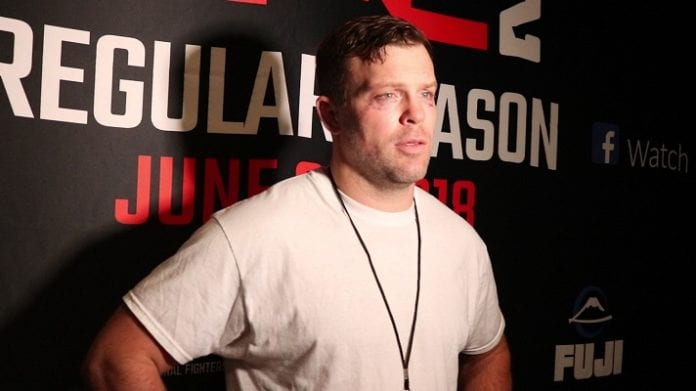 Never one to be afraid to speak his mind, Jon Fitch has expressed a lack of confidence in the PFL $1 million purse payouts. Fitch, who has a Bellator welterweight title fight scheduled with Rory MacDonald in April, expressed his concern over the weekend.

“I don’t have any faith that those guys are going to get paid their full amount,” Fitch said backstage at Bellator 214 (courtesy of MMAJunkie).

The former title challenger didn’t have any inside information regarding PFL’s financials but that didn’t stop Fitch from insisting that the payout’s the PFL promised are not as advertised.

We are four weeks removed from the PFL’s New Years championship event and not one of the $1 million winners has taken issue with their compensation. Surely not season one light heavyweight winner Sean O’Connell, who has already cashed a six-figure check.

“Yes, I got every dime I was promised. All throughout the season that was the case. I got paid according to the rules that we all signed off on and according to the schedule that was laid out before the fights ever even happened with the commission, the drug testing, and all that stuff. It all went off without a hitch. The money is in my bank account and untouchable.”

O’Connell received $100,000 after his semifinals victory and another $100,000 on the night of his finals win over Vinny Magalhaes. After the New York State Athletic Commission (NYSAC) cleared his drug tests, he was paid the remaining $800,000.

As of this writing, O’Connell hasn’t heard of any of the other season one winners having issues with their prize money.

No Other Winners Have Spoken Out

“Not to my knowledge. I don’t get to speak for anybody, but I would imagine that if there issues with pay, you would’ve heard about it,” O’Connell said. “A lot of these guys are represented by the same manager who’s very influential in the business. He’s a vocal individual. I don’t think that if fighters weren’t getting paid, he’d kept giving a lot of there. I’m quite sure that I was taken care of very well. I understand the skepticism with an emerging promotion, but in this case, any concern was unnecessary.”

Ali Abdelaziz is the very influential manager that O’Connell is referring too. He represents four PFL fighters and Ali has already repudiated Fitch’s claims on Twitter.

I love Jon but all my 4 @ProFightLeague champs got paid $1 million Each https://t.co/opueqX4y54

“You think if his guys didn’t get paid he’d be silent about it?” O’Connell said of Abdelaziz.

To be fair many fans and prognosticators don’t think the PFL is sustainable long term. Fitch’s main gripe with PFL seems to be perceived lack of promotion throughout the first season and how that relates to investors.

“All the money comes from investors, and at a certain point in time, if you’re not turning a profit, they’re not going to come around anymore,” Fitch said.

O’Connell had this to say.

“He’s right. You do have to turn a profit to make money,” O’Connell said. “Every indication, every conversation, everything I’ve seen or heard from PFL is that this is a long play. And that they’re in this for the long haul. … I don’t know what Jon Fitch or anyone else is looking for from the PFL. Except that they’re doing what they promised they would do.

“And they’re paying fighters better than other organizations are paying fighters. They are giving opportunity to people maybe who don’t want to go through that whole circus of fight hate speech and Instagram promotion and all that stuff. They just want to be a professional athlete and be a master of your craft to get to the top. They’ve offered me opportunities in broadcasting, which nobody else was willing to do.”