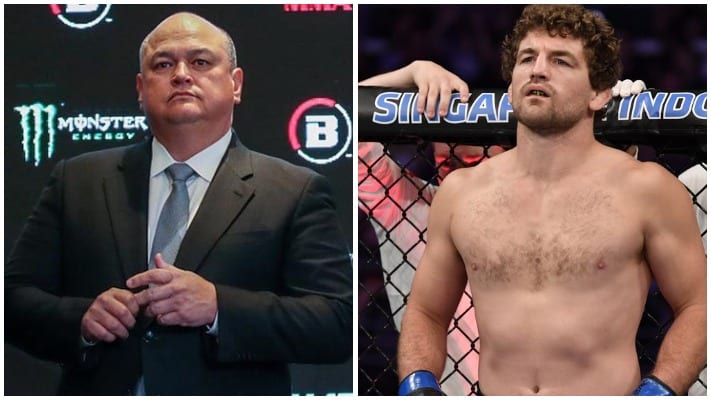 Bellator president Scott Coker is considering taking legal action against Ben Askren who recently claimed the promotion is for sale.

The trouble all started when Coker told MMA Junkie that Askren will get knocked out in his upcoming boxing match with YouTube star Jake Paul, he said.

“I already know who’s gonna win that one. Ben’s a wrestler. Let’s put it that way, right? So I think he gets knocked out in a boxing fight. But in an MMA fight, it’s a different story.”

‘Funky’ didn’t take the prediction from his former boss lightly. He instead hit out at Coker on social media and slammed the work he has been doing with Bellator.

“Hey @ScottCoker remember when your WW champ won a round against me?? Oh yeah he didn’t. How have you not got fired yet, you’re running Bellator into the ground,” Askren wrote on Twitter. “Everyone knows @ViacomCBS is trying to sell @BellatorMMAbc @ScottCoker is doing such a terrible job but they can’t even find a buyer!!!!”

On Wednesday Coker refuted Askren’s claim and even suggested he was looking at what legal avenues he can take against the retired MMA fighter.

“He’s making a very serious accusation that’s untrue,” Coker told MMA Fighting. “I’m meeting with my lawyers later today to discuss our options. He’s just mad because I said Logan would knock him out in a boxing match, which is true.”

Coker admitted Bellator had recently been the subject of a takeover bid but it was rejected, the same way multiple others have been during his stint as Bellator boss.

“This just came up a couple days ago, because there were groups inquiring about [whether] Viacom [would] want to sell a piece of Bellator, and they said no,” Coker said. “There’s probably been five, six offers for Bellator since I’ve been there – in the last few years – and Viacom turned them all down.”

Do you think Scott Coker should take legal action against Ben Askren?