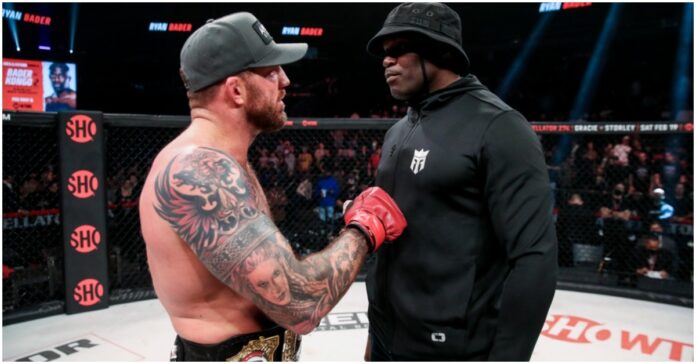 On Saturday, Bellator announced that the promotion would return to Paris, France, hosting a heavyweight title fight between Ryan Bader and Cheick Kongo.

The announcement came after Ryan Bader left the Bellator sphere with a victory over Valetin Moldavsky in the Bellator 273 headliner. The promotion shortly after confirmed that the card would go down on May 6th at Accor Arena and that Bader would defend his title against French native Cheick Kongo.

Kongo was present at Bellator 273 and was brought into the cage for a faceoff with Ryan Bader following his five-round battle. The forty-six-year-old stated he was proud of getting Bellator to France in 2020 and hopes it’s a great sign moving forward for developing the sport in his country.

“Bringing Bellator to France in 2020 was one of the highlights of my career, and I knew that it was the start of a long run of big events in Paris,” Bellator president Scott Coker stated. “Here we are ready for our second trip to France, and this time we are bringing a heavyweight world title rematch featuring arguably the most recognizable French mixed martial artist in our sport’s history. It’s personally important to me to help grow the sport in France and give these athletes a chance to perform on a large stage.”

May 6th will mark the second time Bader and Kongo have shared the Octagon with one another. The first meeting between the heavyweights ended prematurely due to Bader unintentionally poking Kongo in the eye resulting in the fight being declared a non-contest.

Kongo’s last appearance at Bellator Paris didn’t go as planned, as he dropped a unanimous decision to Tim Johnson, which put his title hopes on hold. Kongo bounced back at Bellator 265, recording a round-two submission over Sergei Kharitonov, granting him another crack at gold.

Bader’s victory on Saturday night saw the thirty-six fight veteran back in the win column after being stopped in round one by Corey Anderson. The fight marked Bader’s first fight back at heavyweight since the first meeting with Kongo.

How do you see the heavyweight title fight playing out?