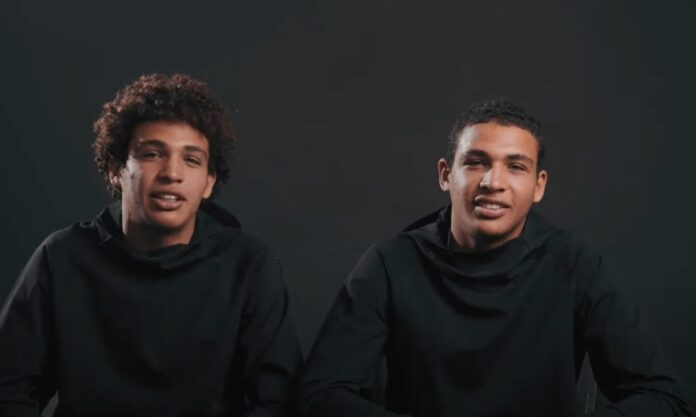 The Ruotolo brothers, Kade and Tye are two of the most talented young stars on the Jiu Jitsu scene today. Kade and Tye have been making waves in BJJ even before they were teens.

Now as young black belts, they are positioned to set the Jiu Jitsu world on fire and become champions. Here is the story so far of the Ruotolo brothers and their rise to stardom in BJJ.

Detailing their start in Jiu Jitsu and how they trained to become two of the best in the world.

The Ruotolo brothers start in BJJ

The Ruotolo brothers started training Jiu Jitsu from the time they could walk. Their father is an avid grappler that encouraged them to train and got them in BJJ when they were just three.

All they ever wanted to do was BJJ training, which their parents fully encouraged. Cleber Luciano was the twins first Jiu Jitsu coach, who would train them for a few years.

While first training with Luciano, the Ruotolo brothers would compete every weekend and began getting noticed. Their commitment and look drew the attention of different companies that sponsored BJJ and MMA athletes.

The brand RVCA would approach the twins’ parents to offer their sons a sponsorship. This sponsorship would make the Ruotolo twins two of the youngest sponsored BJJ athletes in the world.

They would keep getting more attention and earning more medals at different tournaments throughout the west coast.

The Ruotolo brothers time with the AOJ Academy

This connection with RVCA would lead Kade and Tye to join the AOJ team. They trained under the Mendes brothers for around four years learning their patented berimbolo attacks and leg drag passes.

When Kade and Tye were training at AOJ, the school was still an affiliate of the Atos team. Atos founder Andre Galvao quickly took notice of the twins and saw that they were already immensely talented.

Galvao would offer the twins a scholarship to train for free at his school and take them under his wing. Kade and Tye accepted the offer to train under the multiple time world champion.

This is when the Ruotolo’s really started to get noticed by the BJJ world. They were only green belts when they joined Atos, but everyone that saw them compete knew they were special talents.

Under Galvao’s tutelage, Kade and Tye would hone their talents. The twins would win every single major kids and juvenile competition multiple times without much resistance.

This would include at the rank of juvenile blue belt that they briefly stayed at before getting their purple belt. At 15, they would already consistently beat high level black belt competitors.

Galvo knew Cade and Tye and Tye were talented beyond their years and belt rank. When the boys turned 16, Andre would award the twins with their brown belts.

The two would continue their pursuit to greatness starting with the 2019 European Open. Kade would take gold in the brown belt absolute division, while Tye won the middleweight weight class.

Their next big test would be at that year’s world championship, where they would close out their division. Winning their first world titles at brown belts.

They wouldn’t repeat in 2020 due to the global pandemic, but would come back better than ever in 2021. Kade and Tye would once again close out the world winning their second world title at nearly 18 years old.

This would lead Andre Galvao to award the brothers with their black belts that were more than deserved.

The Ruotolo brothers made big news in early 2022, signing a multi grappling match deal with One Championship. This was at the same time, their coach signed his deal to make his comeback to competition. Kade and Tye would make their debuts later on in the year before the IBJJF Worlds took place.

Kade Ruotolo has made some special moments in his young Jiu Jitsu career. He’s not even 20 years old and has already made a name for himself beating the best BJJ athletes out there.

Before Kade earned his black belt, he was already competing against high level black belts on the pro circuit. Early on in his career, he would be a regular on events like WNO, Grapple Fest, and Kumite.

One of Kade’s biggest accomplishments that took everyone by surprise was competing at the Combat Jiu Jitsu Championship in 2020. The Jiu Jitsu competition that includes slaps on the ground.

Kade would have dominant performances to make it to the finals of the event. He would face 10th Planet black belt PJ Barch, who was the favorite to win the event.

Kade would compete in the west coast qualifiers for the 2022 ADCC Championship. In 2019, he let his brother Tye compete in that event, but this time Kade would get his turn.

In this qualifier competition, Kade would have 8 matches in one day against some of the best in the world. He had some outstanding performances that included beating Magid Hage and PJ Barch in a rematch in the semifinals.

The finals of this event would be Kade vs William Tackett that Kade would edge out by a referee decision. Punching his ticket to the ADCC 2022 tournament.

Kade and Tye would sign a deal to grapple for the Singapore based MMA promotion One Championship in 2022. In his debut, Kade would compete against MMA legend and grappling ace Shinya Aoki.

This was one of the biggest tests of Kade’s young career and he dominated Aoki. Creating some of the most spectacular moments of the event by using the cage to take Aoki’s back.

He would win a decision over the MMA veteran.

Tye Ruotolo has had some impressive wins of his own in BJJ competition. Beating some of the best grapplers in the world in numerous events.

At just 16 years old, Tye Ruotolo would compete in his first ADCC Championship in 2019. Facing some stiff competition in the 66 KG division.

He would win his first two matches, but drop his third match to Kennedy Maciel. Then losing the bronze medal match against world champion Paulo Miyao.

Tye would get numerous offers to compete in events on the pro grappling circuit. Competing in events like WNO, F2W, and Grapplefest.

He would win the WNO 84 KG tournament in 2021, which included beating the highly touted  Micah Galvao in the title match.

Ruotolo was able to pull off one of the most shocking upsets in 2022 at his One Championship. He came in a big underdog against veteran and fan favorite Garry Tonon.

Tye dominated Tonon from the opening second of their match. He was able to lock in a darce to get the win in just two minutes and shocked the world.

Tye would compete at the 2022 IBJJF World Championship, while his brother Kade sat out of this event. He would compete in the 76 KG division that was arguably the most talented division of the tournament.

He would then shut out Levi Jones 8-0 in his quarter finals match and the shutout Gracie Barra standout Lucas Valente.

The finals of the 76 KG division would be Tye taking on Micah Galvao in a rematch. They would have a back and forth battle for 10 minutes with Micah Galvao winning the bout 2-0.

Ruotolo came up short, but said he would be back again next year to try and win the title again.

What’s the future for the Ruotolo brothers?

The Ruotolo brothers are two of the most talented stars in Jiu Jitsu with a bright future ahead of them. Kade is making his ADCC debut this year and Tye came in 2nd at this year’s IBJJF World Championships.

They are both at the beginning of their career and already accomplished more than many seasoned pro grappling athletes. We will no doubt be seeing more of the Ruotolo brothers in the future.