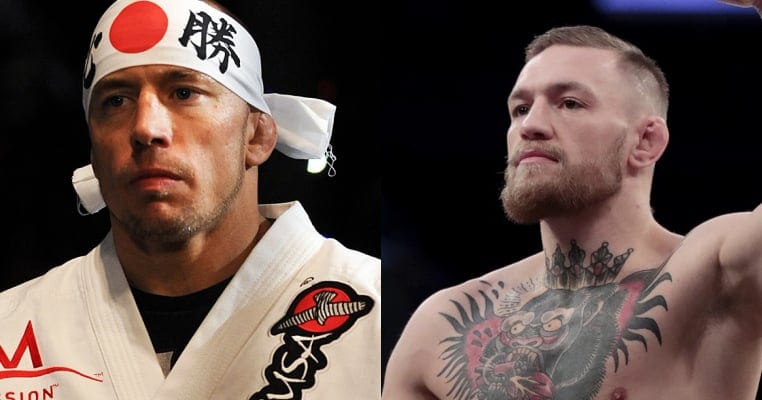 Many have derided the fight based on St-Pierre’s lengthy absence and the fact that he has never fought at middleweight, but the MMA legend has insisted he only wants to come back for the biggest and best fights. If he does get by ‘The Count,’ who’s gradually become the most hated man in the 185-pound division, he’s aiming for one that would be much, much bigger than even his fight versus Bisping indeed.

At least, that’s according to St-Pierre’s TriStar Gym training partner Olivier Aubin-Mercier, who revealed to TSN (via The Irish Mirror) that GSP will call out McGregor if he wins the middleweight title at UFC 217:

“I think what will be probable is that he will call out Conor after. That’s what I would do. I think for the UFC, it’s a really smart fight to do. It’s a win-win for them. Well, win-win, kind of, for short term.”

There’ve been whispers St-Pierre had a plan to eventually face the biggest name in mixed martial arts right now, and you couldn’t blame him, as a bout versus the ultra-popular “Notorious” would be the biggest UFC bout of all-time.

Following his record-setting pay-per-view (PPV) payday with Floyd Mayweather in the boxing ring last month, the lightweight champion is rumored to be coming back for a trilogy bout with longtime rival Nate Diaz, although it’s nothing but rumor at this point.

If St-Pierre can shake off the dust and beat the brash champion, who will have out of action for over a year when they finally meet, however, then he could have an arguably even bigger fish on the line if St-Pierre does call him out.

Which one do you want to see?