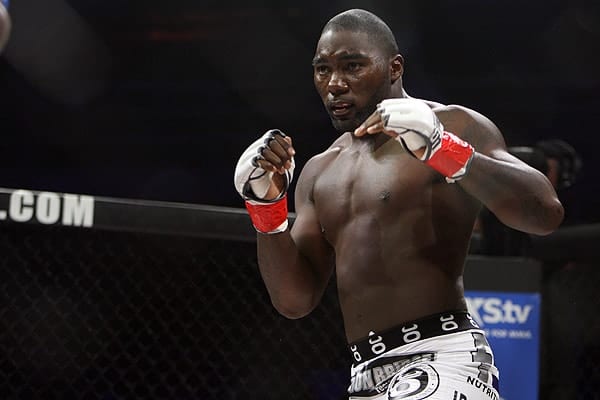 Domestic violence has had a profound effect on the NFL lately, and today, it has spilled over into MMA.

Tonight, the UFC, acting on a restraining order based on abuse filed by the mother of his children, have indefinitely suspended No. 5-ranked light heavyweight Anthony “Rumble” Johnson.

The promotion released the following statement on “Rumble’s” suspension:

We are aware of the situation involving Anthony Johnson. As a result, we are suspending him indefinitely. We are using a third-party law firm to conduct a formal investigation and once we have more information, we’ll determine whether further course of action is necessary.

Johnson allegedly has a history of abuse with the woman who filed the restraining order against him, and she contacted the police about Johnson, who allegedly knocked out two of her teeth in 2012. Here is the police report filed by Johnson’s supposed victim, who chose to remain nameless, courtesy of Bloody Elbow:

On 09/05/14 I met with the complainant, *redacted*, at the DBPD in reference to a domestic dispute. *Redacted* advised that she is frightened by the father of their children, Anthony Johnson.

*Redacted* stated that two years ago Johnson hit her in the face and knocked out two of her teeth. Since that incident she has had several other verbal altercations with Johnson. *redacted* has only reported one of the incidents to the police.

Most recently, Johnson went to *redacted*’s house and took their dog on 08/24/14. *Redacted* also advised that she keeps receiving calls and text messages from an unknown male subject threatening her. *Redacted* stated that it’s not Johnson but thinks it’s his friends.

I advised *redacted* to go to the Courthouse and obtain a no contact order against Johnson.

I provided *redacted* with a domestic violence brochure.

The news comes as a sad twist in Johnson’s previously soaring comeback, during which he had eight straight fights.

Meanwhile, Thiago Silva, who was recently re-signed to the UFC after being released following a litany of domestic violence-related charges this year, was re-released when his ex-wife Thaysa Kamiji released video evidence of him allegedly high on cocaine:

The UFC’s statement on Silva:

Thiago Silva was released from his UFC contract on Feb. 7 due to his arrest by police in South Florida. The charges against Silva were dropped by the Broward County District Attorney’s office and Silva was re-signed to the UFC earlier this month. Based on new information received today in the form of video and audio evidence, Silva has been terminated from his UFC contract.

So it’s been quite the day for the UFC in terms of the all-too-prevalent topic of domestic violence. “Rumble” was supposed to face off with Alexander Gustafsson sometime early next year, but now his UFC is seriously in jeopardy.