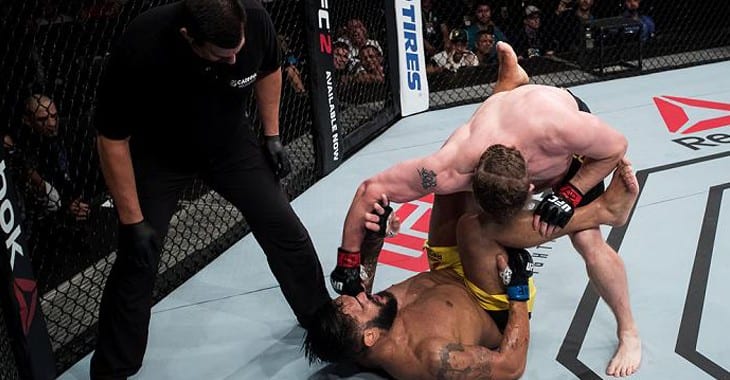 It appears as though Roy Nelson will be judged for kicking referee Big John McCarthy after his UFC Fight Night 95 clash with Antonio ‘Bigfoot’ Silva in Brazil.

Nelson took the Brazilian out in the second round, but kicked ‘Big John’ after the stoppage and gave him the one finger salute after feeling that the referee stopped the contest too late:

“I didn’t want to hurt ‘Bigfoot’ more than I had to,” Nelson said during the post-fight press conference in Brasilia. “And I got taken by the moment, because it’s like I’m beating the sh*t out of somebody and you’re like, dude, enough is enough.

And for me, it hurt my feelings. And I apologize to Big John, but I wouldn’t take it back. It just hurt me, that I’ve got to keep on hitting a guy that doesn’t need to be hit.”

MMA Fighting obtained a document from The Superior Justice Court of MMA (STJDMMA) earlier today, which states that Nelson was notified of a 90-day suspension that begun on September 29th. Following the event The STJDMMA accepted a complaint filed by one of its attorneys

Nelson could be charged a potential fine of up to $30,000 and anywhere from a 30-day to six-month suspension for assaulting McCarthy.

The attorney is suggesting a 14-month suspension and $18,500 fine, however, the President of the STJDMMA still must evaluate the case. Nelson has been given business days to present his defense.