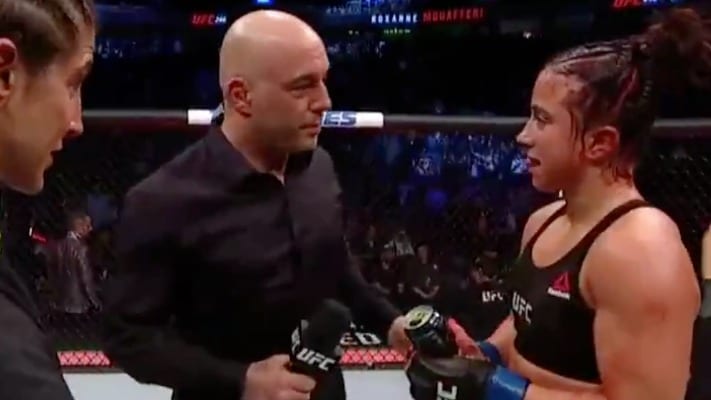 Roxanne Modafferi had mixed feelings about Maycee Barber speaking on the microphone at UFC 246.

Modafferi quite literally upset the odds as she defeated Barber via unanimous decision and handed “The Future” her first loss in mixed martial arts. Usually the winner of the fight talks to Joe Rogan first.

However, Barber — who notably tore her ACL during the fight — asked to have some time on the microphone first. She gave praise to Modafferi while also apologizing for the result before embracing her opponent.

Although it was a gesture with good intentions, it didn’t go down well with many.

Modafferi, herself, was not sure what to make of it especially as she felt a little dissed by what Barber said:

“Mixed feelings,” Modafferi said on Ariel Helwani’s MMA Show on Monday. “She said it was an honor to fight me and that was cool. And she said she wasn’t embarrassed about her performance because it made me shine or something. And I was like did she just diss me?

“I’ll give her the benefit of the doubt so I don’t know. Whatever. I won the fight. I believe even if she hadn’t injured her leg, I still would have taken the fight. I was beating her in the first round anyway.”

What did you think of Barber taking the mic?