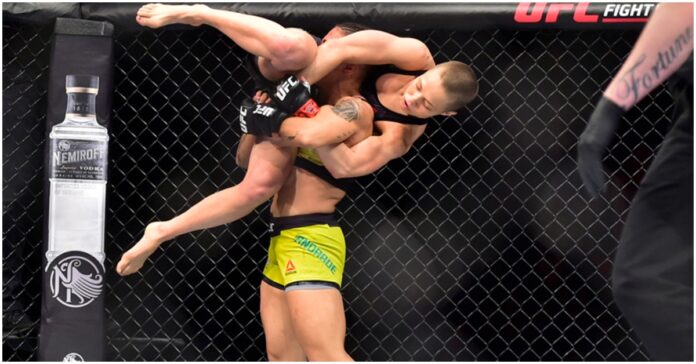 Rose Namajunas is currently set to defend her title against Carla Esparza at UFC 274. Esparza actually defeated Namajunas in December of 2013, when they fought for the inaugural UFC strawweight title. ‘Thug Rose’ will look to continue her second reign as a champion with a second successful title defense, something she was unable to achieve the first time around.

During Namajunas first stint as strawweight queen, after successfully rematching and defending her title against Joanna Jędrzejczyk, she was paired with heavy-handed Brazilian Jéssica Andrade. In what would be her second defense in a fight that she was finding early success in, Namajunas was be slammed on directly on her neck by Andrade, knocking her unconscious.

One would think that after suffering such a brutal slam, Namajunas would be left with a long-term injury of sorts, but in fact, it was the opposite. During an episode of ‘Moring Combat’, Namajunas shared with Luke Thomas the remarkable changes to her neck following the bout.

“With Andrade, I mean, that was just a complete, total stripping away of any innocence as far as — I got slammed on my neck and then I got my nose broken second fight,” Namajunas explained. “The first fight was so different from the second fight. I didn’t really actually sustain any damage, even though I got like, KOed.

“Actually, the neck problems that I had went away after getting slammed on my neck, which is kinda weird. It was sort of a miracle for me. I came out of that fight unscathed basically.”

“I never thought about actually getting it checked out like, afterwards. But before, I had a fracture in my C6, and then I also had spinal stenosis,” Namajunas. “It would like, make my arm feel weak sometimes, just lifting up my arm. I would get these terrible headaches and stuff. Sometimes if I’m wrestling a lot and grappling, my neck would be a little bit sore.

“I used to have to put my head in the ice bath backwards just cause my headaches would be so bad. And that was leading up to my first fight with her (Andrade)… Afterward, I experienced none of those symptoms anymore,” added Namajunas. “I should probably see if I still have those problems.”

How will Rose Namajunas fair next weekend?