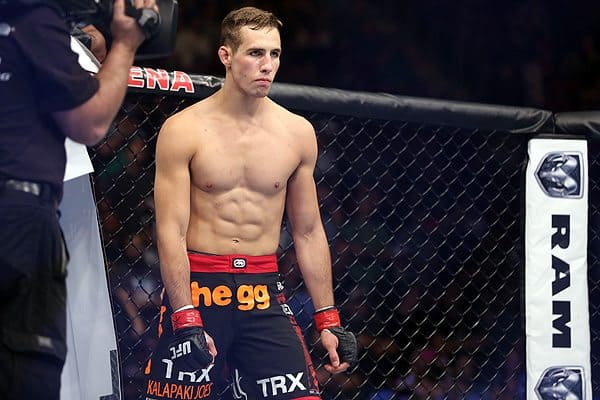 This past Friday (May 25, 2018), Gegard Mousasi scored a first-round stoppage victory over Rafael Carvalho in the main event of Bellator 200 from London, England to become the promotion’s 185-pound champion.

Following the victory, Mousasi called out welterweight champion Rory MacDonald, who has expressed his interest in fighting Mousasi as well. Speaking today (May 29, 2018), however, MacDonald implied that Bellator is undecided on whether or not the fight will be made:

“The feeling I’m getting because I’ve been going back and forth with them a lot because I’m very interested and I’m pushing for this fight, so I’ve been messaging (Bellator president) Scott (Coker), messaging (Bellator vice president of talent relations) Richard Chou, and the feeling I’m getting from them is they don’t know,” MacDonald said on Monday’s edition of The MMA Hour. “I think they’re going to meet about it with everyone who makes those kinds of decisions and I think they’ll make an executive decision at that point.

“Obviously, me and Gegard want it and I think the fans want it. I think it would be the biggest fight that Bellator, that they could put on right now. In my opinion, if they pass this opportunity by, it would be a mistake because how often can you get this kind of timing and one fight could change the direction of any one of our careers, so I think the opportunity is now and we should take it.”

As far as why he wants the fight himself, MacDonald detailed ‘multiple reasons’ for wanting to share the cage with Mousasi:

“For multiple reasons,” MacDonald said. “Number one, it was my goal to be a champion of middleweight and welterweight. And then Gegard’s been hunting the fight between us, he wants to fight me and I obviously want what he has, so I think that’s great timing. He’s one of the best guys in the world at 185, so who better to fight for a world title at middleweight than him?”

MacDonald, a mainstay of the UFC’s welterweight division for years, signed with Bellator in 2016 following a two-fight losing streak. Since then, however, he’s won back-to-back fights over the likes of Paul Daley and Douglas Lima.

Mousasi, on the other hand, signed with Bellator in July 2017 and has won back-to-back fights as well, beating Alexander Shlemenko in his debut before stopping Carvalho. He’s currently riding a seven-fight win streak.