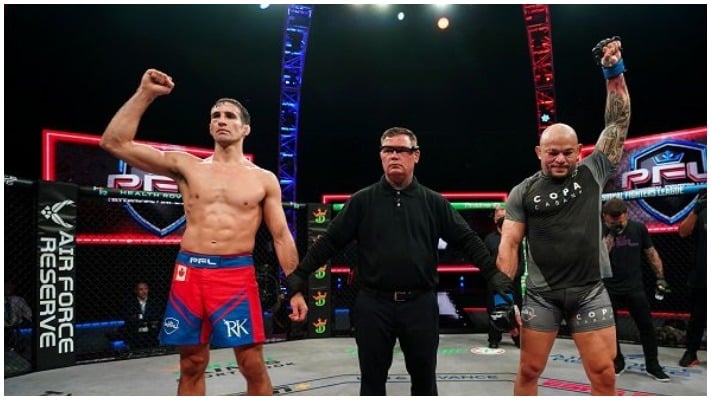 Rory MacDonald angrily called for an investigation into his split decision loss to Gleison Tibau at PFL 5 which took place at the Ocean Casino Resort in Atlantic City, New Jersey last night.

MacDonald appeared to have easily done enough to take home the judges decision after three rounds against Tibau. However, the former Bellator to champion and fans watching around the world got a shock when Tibau was awarded a split decision win.

At the PFL 5 post-fight press conference MacDonald called for an investigation into the result as he feels he “clearly won” the fight and could’ve even been awarded all three rounds.

“I’m very disappointed,” MacDonald said. “I believe and everyone I talked to, and everyone online, scored the fight for me. Even three rounds to zero, so I think it was a clear robbery. I thought I was dominant in this fight. It was a hard fight. Gleison brought it, and respect to him, but I believe that I clearly won that fight and I think that this should be looked into.”

At the conclusion of his fight with Tibau, MacDonald had no doubt he had done enough to win and would be awarded for his efforts by the judges.

“I was totally sure,” MacDonald said. “I was so surprised when the first judge, they announced and scored it for him. I was shocked. But when I heard the split decision that he got it, I was blown away. What do you say? I just didn’t see it that way at all.”

MacDonald went on to suggest some changes that should be made to MMA judging which often throws up these type of cooky results.

“We shouldn’t have to as fighters, as competitors (worry about the decision),” MacDonald said. “We should be able to fight and rest easy that we have competent, fair, truthful judging in our sport. It shouldn’t be something that we have to worry about and stick our necks out on the line and our health to do something stupid. It’s just crazy. We don’t have this in any other major sporting even. It just seems like over and over and over again, we’re getting this in our sport and it’s just a real shame.” (Transcribed by MMA Junkie)

Do you think Rory MacDonald was robbed at PFL 5?