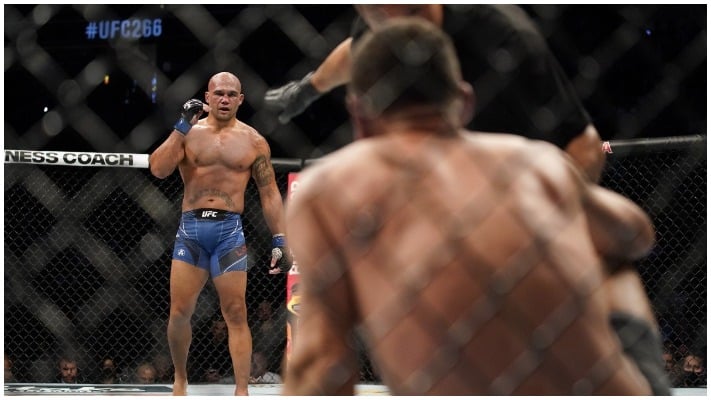 It might’ve taken 17 years, but Robbie Lawler has finally avenged his defeat to Nick Diaz.

The welterweight legends first squared off in 2004 with Diaz emerging with an epic KO win after two rounds of war at UFC 47.

On Saturday night, Lawler got his long-overdue shot at redemption. ‘Ruthless’ entered the bout on a four-fight winless streak while Diaz was fighting for the first time in more than six years.

The fight delivered big time with both men going back and forth for three rounds before Diaz dropped to his knees and refused to get back to his feet forcing Herb Dean to wave off the bout.

Post-fight, some critics called out Diaz for quitting but Lawler doesn’t agree with that notion.

“He’s a warrior,” Lawler added. “He was standing right there in the pocket. I throw hard shots and he was taking them. It was a lot of damage. When you go back and watch the fight it was a war. A three-round war. I hit pretty hard and it just wasn’t his night.” (Transcribed by MMA Junkie)

Do you agree with Robbie Lawler? Did his finish of Nick Diaz come from an accumulation of damage he inflicted over three rounds at UFC 266?