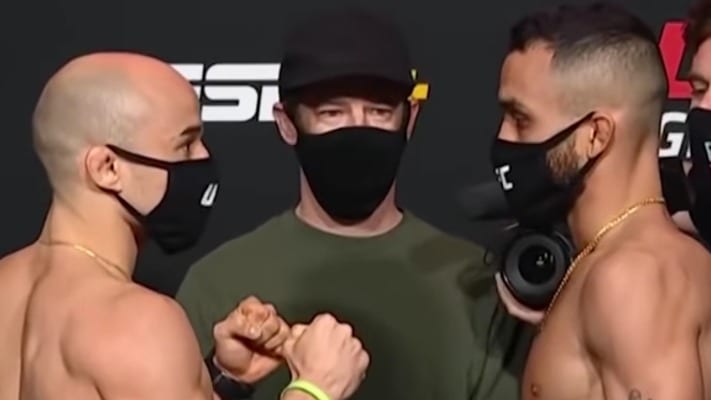 Next up on the UFC Vegas 17 main card is a bantamweight tilt between Marlon Moraes and Rob Font.

Round 1: Moraes starts things off with a body kick. He lands another as Font catches him with a right hand. Moraes shoots him and gets Font down soon after. Moraes looks to lock up the guillotine submission but Font defends and has Moraes up against the fence. They’re back on their feet before Moraes gets him down again. It appears he’s finally using his jiu-jitsu in addition to being wary of the boxing of Font. Moraes stacks up temporarily and lands some strikes before entering Font’s guard. Font gets up to his feet and the two are swinging now. Font lands a huge combination that hurts Moraes. Moraes sees his spinning wheel kick blocked before Font rocks him with a jab and dropping him. Moraes does his best to fight back but Font unloads a barrage of strikes to eventually get the stoppage victory!